Voodoo, or voudon, was brought to Haiti by African slaves. Naturally, as missionaries in turn took the Roman Catholic religion to Haiti, Christianity is part and parcel of voodoo. A curious admixture!

Medieval grimoires are sophisticated in their use of symbolism. They are also frequently obscure, whether through copying errors, intentional ‘blinds’ or perhaps sheer ignorance. One only has to look at the Keys of Solomon, usually rated as a better class of grimoire, to find complex systems of astronomical hours and days, Qabalistic powers, thrones and dominions. Add to that the hosts of angels, demons and spirits, each defined by quality, type and signature, and one can see why these rare books, usually written in Latin, were sought after by luminaries such as John Dee.[1] 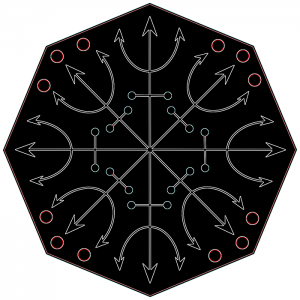 In the case of grimoires we can usually assume the recipe ingredients are metaphorical. If the instruction is to use the ‘blood of bat and eye of newt’ we know that what we are really being told is to use black ink pigment for the vellum. The newt is neuter, ‘neither-not’, and is a salamander that has the combined characteristics of fish, serpent and frog. The field of magical transmutation is that part of the occult anatomy corresponding to the medulla oblongata.

I stand up next to a mountain, and chop it down with the ledge of my hand … I pick up all the pieces and make an island, might even raise it to the sand.

The song lyric is not about commanding the forces of nature. It is about being the force of nature itself. Hendrix delighted in such esoteric themes as the precession of the equinoxes and magical birth, death and resurrection. There are tales of being abandoned in a deserted place, rescued by mountain lions and carried through the air on an eagle’s back. Self-identification with natural and cosmic forces as typified in the natal horoscope is a key magical practice. Some are born with a powerful sense of destiny, others seek it out. All must come to understand at last the impersonal source of such power, or else suffer the delusion of personal identification with Ishvara, the ‘great chief’. The relationship with the Holy Guardian Angel is more complex than that of any terrestrial daemon.

What then are we to make of the ‘black cat bone’, as recounted by legendary blues singers? The instruction might well have been intended quite literally. Bones, whether human or animal, are frequently used to decorate the village shaman’s hut—or apartment, as it may be. It seems fairly unlikely that modern devotees of the hybrid cult will be devout (and practicing) Roman Catholics, which rules out any really authentic voodoo initiation. The faith is an absolute requirement, as it was for the European witches, so called. There is one thing we can know for certain. Once we begin to imagine that the mere procurement of the right ingredients will confer supreme governance of nature then we are certainly on the short road to the lunatic asylum. Analysis is necessary, then synthesis. We need both solve and coagula to work magick.

Let us begin then with solve. We are told the creature must be ‘black’. Black is the one colour that is not a colour; it is defined by the absence of any colour. Very good. What of the feline? The cat is notable as combining the characteristics of lion and serpent—a fact that owes in some measure to the pronounced flexibility of the spine. In a certain sense the cat is also neuter, as was the case with the newt. Finally, the bone—the hardest, most indestructible part of the physical frame.

Having applied solve, we may proceed to coagula. The real import of the black cat bone has been readily revealed. All we had to do was to think of the principles involved, the neteru. We must now apply this knowledge to our great and noble purpose. We have an absence, an androgynous lion-serpent, and the most indestructible part of the anatomy. Magical operations do not begin with a word; they begin with silence. Before Kether is Ain Soph Aur, before that, Ain Soph, and before that we have Ain, beyond definition. While magick begins there, meditation ends there, if it ends at all. It is the goal of yoga to know as we are known, and to do that we first have to get ourselves out of the way. We now know something of the conditions needed for a magical operation, beyond any considerations of the timely orbits of the planets. We go to praxis. In this, we are inspired to spontaneous utterance of prayer, of invocation. Yet we maintain silence, else no bone may be cast. By supreme effort of will, all images are forged in the one image.

In the rolling abyss, a glowing spark—behold!
Flame-fire in the depth: Energy of the Universe unfold.
Thy serpent trunk, thy lion crown bedecked with stars.
My God, my God! Nameless thou art.

Thou lurking beast, to whom all flesh is prey,
Devourer on the threshold of Amenti,
Legion on the bank of Bayou,
Feast on judgement day!

Hastened by Odin’s eightfold steed,
Honed in the stalwart stream.
Raised up, the mount of bones gleaming white.
Then behold one king—crucified.

1. The Mage John Dee was the personal astrologer to Queen Elizabeth I and a leading scientist and cartographer.