The Hermit of Tarot in the Egyptian Tarot of Thelema is Isis IX.[1] Virgo is the sign of the pure maiden, the inviolate sceptre—which is all a way of veiling with words and images the inexpressible truth of the supreme principle (Sanskrit Atma). The yod, bindu, flame or seed-star that is the letter of the 20th path of the Tree of Life is, in the Thelemic schema, Hadit, the giver of Life, the animator of all things that live and move and have their being. 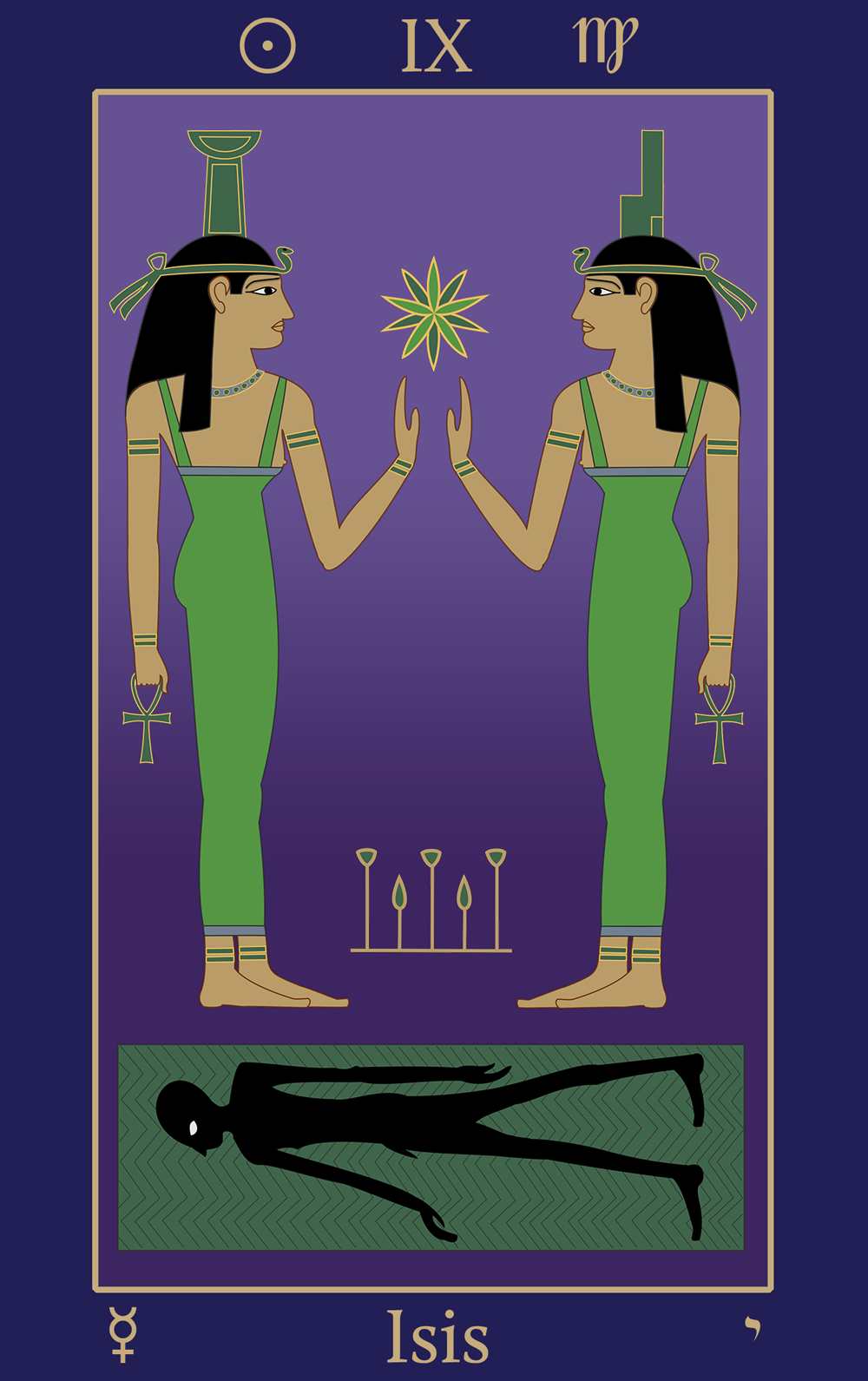 The esoteric title of the trump is Prophet of the Eternal: Magus of the Voice of Power. The 20th path of Yod connects Chesed, the sphere of Jupiter, with Tiphereth, the sphere of the Sun. The path is called The Intelligence of Will since it is the stream of light or intelligence forming the innermost structures of the intellect in man. The Intelligence of Will is called thus “because it forms all patterns, and to know this Intelligence is to know the whole reality of the Primordial Wisdom.” The knowledge of the spiritual will constitutes the full realisation of the cosmic purpose or meaning in all things; on this path arises the possibility of knowing the True Will or True Self (Atma).[2] A hermit is thus, in the true sense, an initiate.

The Hermit as Mercury

Hadit is Mercury in the dual manifested worlds of being. Mercury is the planetary ruler of the astrological sign of Virgo, and Virgo is unique in the Zodiac in that Mercury rules her sign and is exalted therein. The lamp of the hermit is a metaphor for the Occult Light, which is veiled from the world and the worldly. The staff of the hermit is the Energy and Will required for the strict vigilance and economy of means that is needful in the Great Work.

In the Golden Dawn system of correspondences, Virgo is the sign of Isis. The will-seed is hers in a subtler sense.[3] While Asar (Osiris) has this seed-star latent within him, if he limits or restricts Isis (the woman) through adoration of his personalised will then he dooms her (thusly, his soul) to the fate of the Scarlet Woman as described in the (Egyptian) Book of the Law, III: 43.

I will slay me her child: I will alienate her heart: I will cast her out from men: as a shrinking and despised harlot shall she crawl through dusk wet streets, and die cold and an-hungered.

Fragmentation of the Atomic Age

The mundane character of Virgo, the mutable earth sign, is all about the particulars, the details of every-thing. The conceptual mind, driven forwards by the scourge of Hadit, yet thrown back into the abyss by the son of Typhon, breeds and begets more and more infernal children. Thus Conceptual Art is now the predominant doctrine in today’s educational institutions. It is a sign or omen that the analytical mind has attained its full immersion in the realm of matter at its lowest or most dense level.

At this material extremity of the human mind, the situation depicted in the minor Tarot card called the Ten of Swords comes about. The human heart or soul is broken up into fragments that are blasted, blown and scattered through the echoing emptiness of space—torn apart by the divisive power of the sword of the reasoning mind. As a race, we are still in the aftermath of the explosion of the first atom bomb. We live in an age that trembles before its the terrifying shadow. The trauma of that tremendous atom-smashing event, that has rended apart far more than matter, now continues to reverberate on the plane of mind. The cell phones, computers and other digital devices that are now the plague-fetishes of our times are no more than ‘particular’ vehicles of expression for the lasting imprint of that hellish atomic atrocity upon the collective mind of humanity. That singular event demonstrated that conventional science is, in the end, capable only of producing senseless, barbaric mass-destruction on a scale never before imagined.

The very first atom-splitting test tore open the fabric of space and time. A crack was then opened up in the delicate membrane that encircles the planet—the invisible egg of light that once served as a barrier or ring-pass-not against the intrusion of Qliphotic forces.

The physical destruction unleashed by the atom is itself a metaphor for the intellectually destructive philosophical atomism, which was first introduced through the arguments of the ancient Greeks. Causal determinism is still the dominant intellectual mode of our times.[4] The tragic consequences of this are but dimly perceived by the legions of cerebrally and sensually anaesthetised hominids—those who dare not take their eyes and ears away from the beguiling artificial world of digital information. The configuration of stars and planets signifies that we have truly entered a new era. It is an era in which Initiates must conserve all of their energy and direct it towards the Great Work. Only then will they succeed in rising up above what is metaphorically termed, the waters of the Nile flood. While the water of the flood is not evil in itself, the dwellers that lurk within present a foe more formidable than mankind has ever imagined.

1. The Egyptian Tarot of Thelema restores Atu IX to Isis. The trump is shown and fully described here.
2. A commentary on the wisdom texts of the Sepher Yetzirah is provided in The Flaming Sword Sepher Sephiroth [Ordo Astri].
3. The error of causal determinism is fully explained in ‘Lapis Philosophorum’, Babalon Unveiled! Thelemic Monographs [Ordo Astri].