Thelemic Tarot divination requires the method called ‘dignities’. The method of dignities is fully explained in a related article: 15-card Thoth Tarot. The cards are read in sets of three, so we can apply the elemental dignities of the Tarot. The card pictured below is Egyptian Tarot of Thelema Atu II, The Priestess. 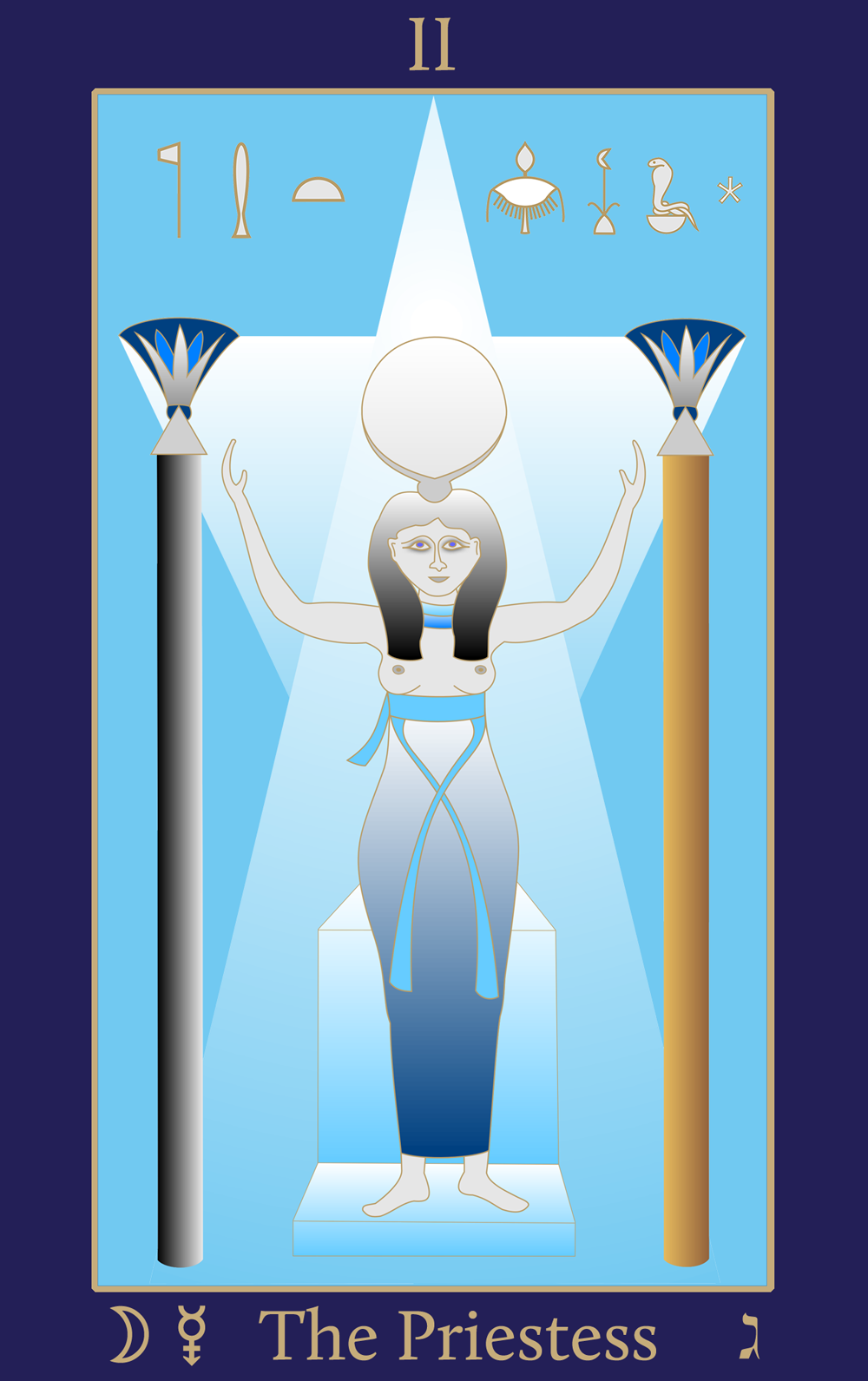 The simplest method of using dignities for accuracy of divination is as follows:

0. Prepare yourself and the deck by invoking.

I invoke thee IAO, that thou wilt send HRU, the great Angel that is set over the operations of the Secret Wisdom, to lay his hand invisibly upon these consecrated cards of art. Thus shall I obtain true knowledge of hidden things, to the glory of thine ineffable Name! AUM.

1. Shuffle and cut the deck into three piles. Put them back together in one pile ensuring that the cards that were at the bottom of the deck before cutting are now on the top.

In the sphere I am everywhere the centre, as she, the circumference, is nowhere found. Yet she shall be known and I never.

The Thelemic Tarot Pyramid Spread is a three-dimensional expansion of the three-card method. The first card is numbered zero and placed in the centre. It is numbered zero as it represents Da’ath, the non-sephira figured by Set-Hadit. The other three cards are laid out to form an upright triangle. On the Tree of Life, Da’ath is the apex of a tetrahedron of which the first three numbers form the base. 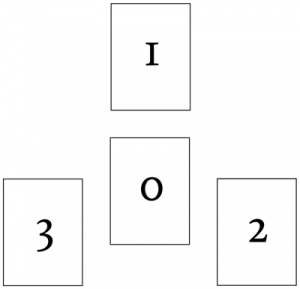 Prepare yourself and the deck by invoking. Shuffle, cut and replace the cards as previously described. Lay out the cards as shown here, forming a supernal triad with Da’ath at the apex of the tetrahedron.

The first three cards represent the matter itself that is the subject of the enquiry, as exoteric. The centre card, the apex of the pyramid, symbolises the Will, which is esoteric. The centre card is thus that which may emerge at a later time, or is otherwise a hidden but determinative factor.

Bear in mind that the nature of the Will (Hadit) is esoteric. The ‘Effect’ (Nuit’s appearance) is exoteric. Thus, however skilful we may be in the art of divination, and however adept we may be with the method of dignities, what we are seeking may not be fully revealed until reification of the Will-current has come about. Nonetheless, when divination is performed with the right attitude of mind, a powerful magical operation is set in place. The invocation appeals to the ineffable. That which is hidden will surely and most certainly come to light.

To ‘divine’ is not necessarily to make a prediction of future events, which is an error of deterministic thinking, that one thing ‘causes’ another thing in an endless chain from past to future. Such thinking is described in the (Egyptian) Book of the Law as the “word of Sin” that is “Restriction”.[1] The word ‘divine’ originates from the Latin, divinus, which means, ‘like a god’. That is to say, in the image of a god one may know something about that god. Put in plainer terms, it is to know the truth of a matter