The Thoth Tarot trump for the 25th path of Sagittarius is Art XIV, depicting the Holy Guardian Angel performing a work of transmutation on the soul. The full title of the trump is Daughter of the Reconcilers: Bringer-forth of Life. 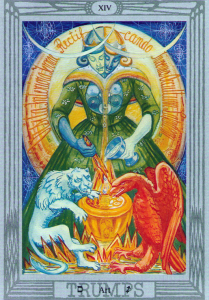 This trump is traditionally titled Temperance. It usually depicts an Angel pouring liquid between blue and red vases. In the Crowley-Harris Thoth deck, the card has been retitled Art. It is the art of alchemy that is portrayed here. The trump corresponds to Sagittarius, the mutable fire sign of the Zodiac.

The signs of the Zodiac are best understood as pairs; Gemini is opposite and complementary to Sagittarius the Archer or Centaur. In the Tarot trump for Gemini, the Lovers, pairs of opposites are shown: black and white, silver and gold, good and evil, male and female. The red and white tinctures of alchemy are symbolised by a lion and an eagle. In the trump for Sagittarius all these opposites have exchanged places; the red lion has become white, the white eagle has become red. The Holy Guardian Angel, clothed in green and wearing light and dark masks, pours fire and water into a golden cauldron. In the cauldron she mixes drops of blood from the paw of the lion and tears from the mouth of the eagle.

The link between Gemini and Sagittarius is the Arrow of Will. A stream of light, guided by an arrow, rises upwards from the cauldron until it reaches the heart of the Angel. From there the light branches into a rainbow that falls over her shoulders like a cape. Whereas the card for Gemini depicted a mystic marriage, the card called Art symbolises the consummation of that mystical union. The spiritual idea (according to the Book of Thoth, pp. 103) is that an incomplete element is spiritualised only through the assimilation of its equal and opposite. A legend is inscribed in gold lettering upon a large orb, shining like the Sun behind the Angel.

‘Visit the interior parts of the earth: by rectification thou shalt find the hidden stone.’ Alchemists described the stone of the wise or universal medicine variously as a stone, a powder or a tincture. It may be divided into silver and gold or red and white, but its essence is always the same.

Sagittarius and the Flaming Sword

The esoteric title of the 25th path of Sagittarius is Daughter of the Reconcilers: Bringer-forth of Life. Hence, the magical power of the 25th path is the Power of Transmutations. The old Tarot of Marseille depicts an Angel pouring liquid between blue and red vases. It is not difficult to conclude the art of alchemy is portrayed there—Sagittarius is after all the mutable fire sign of the Zodiac. Neptune or Shiva, principle of the dissolution of aeons, is the governor of the mutable signs.

The 25th path connects the sphere of the Moon or natural psyche with that of the Sun, the centre of the mind’s intelligence. The silver of the Moon and gold of the Sun are here fused into the stone of the wise or philosophic egg. These terms are metaphors for the ‘substance’ of the immortal principle. Fools will always attempt to apprehend the immortal stone—similarly, a child might seek to capture sunshine in a bottle. While the child may be rewarded with a faery song, the real fool will get nothing in return for the immortal soul that he has traded away in return for wordly acquisition.

The 25th path crosses the veil called Paroketh, marking the division between the world of appearances and the formless world of spirit, which is completely invisible to the profane. As such, the 25th path is called the Intelligence of Probation or Trial. The mind’s intelligence (Ruach) has its foundation in Yesod, the natural soul or body. It is only by trial and experience that the harmony and beauty of Tiphereth can be fixed as a permanent reflection in Yesod. The proving of the Great Work is not the kind of ‘proving’ that might convince the sceptic but is the proving of the very soul. To be a foundation for beauty, the psyche must undergo the purification of study, the organisation of the thoughts. Likewise, the body must submit to the beneficent astringent of the rituals and practice.

The operation of the Great Work can only proceed if the aspirant practices detachment, indifference to phenomena, and refuses to self-identify with the actions of the personality and events that seem to be taking place around. The ‘indifference’ is not to be thought of as lack of attention. The level of observation is intensified through meditation practice. As the spinner of the worlds,  Neïth also fires the Arrow of Truth that spells dissolution of ego—a process that must begin no sooner than a foot is placed on the path. For that reason the Intelligence of Probation is often likened to a Dark Night of the Soul.

1. From the ancient Egyptian Emerald Tablet of Hermes Trismegistus.