Cancer, Chariot of the Sun, is the 18th path on the Tree of Life and is the intelligence linking the Understanding of Binah, the throne of Saturn, with Geburah, the energy of Mars. The esoteric title of the path is Child of the Powers of the Waters: Lord of the Triumph of Light. 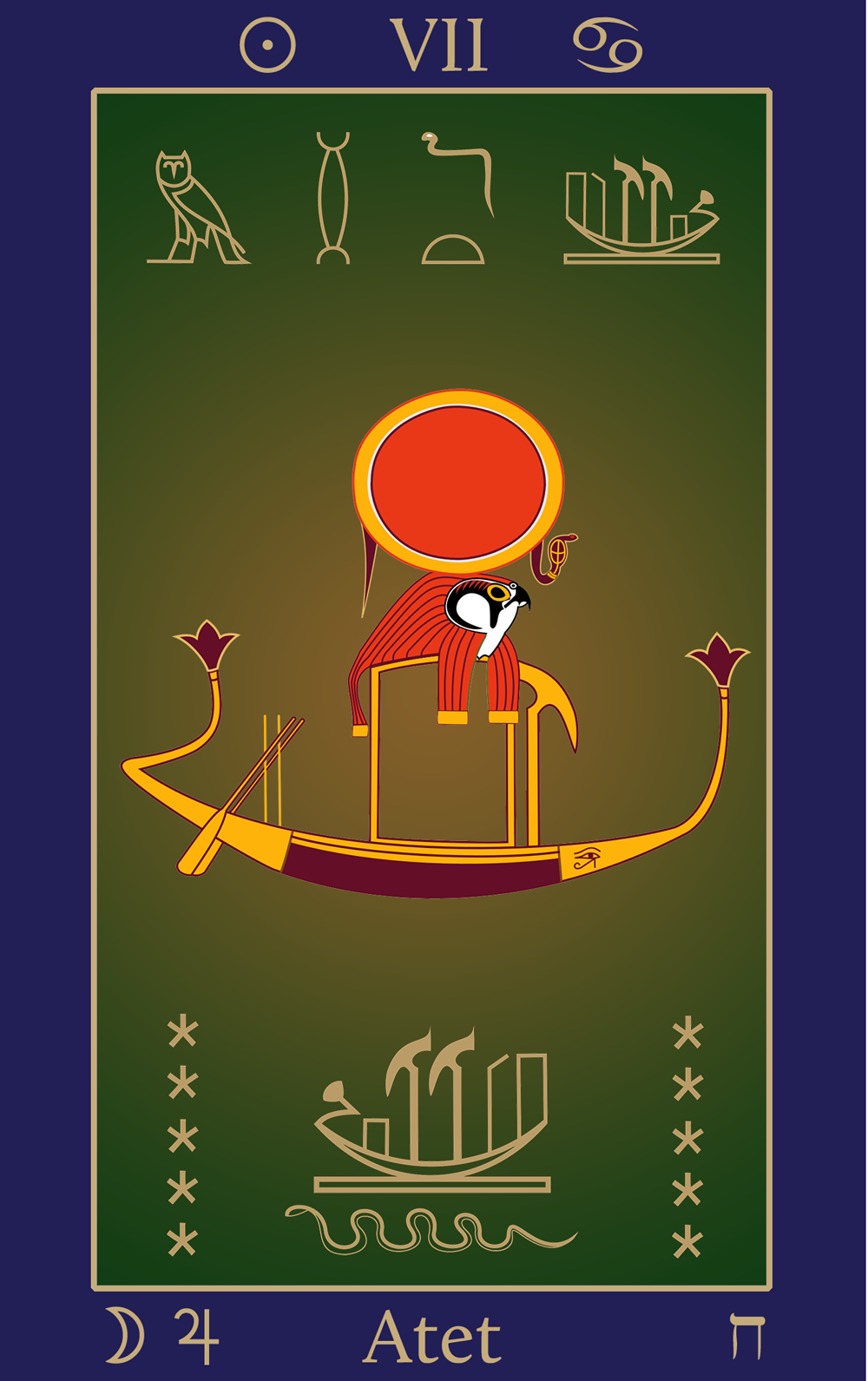 The Egyptian Tarot of Thelema Atu is Atet VII, depicting the Sun Boat of Ra at the summer solstice.[1] In cosmic aspect the Khu or vessel is the ‘company of heaven’ referred to in the (Egyptian) Book of the Law, I: 1–4:

Had! The manifestation of Nuit. The unveiling of the company of heaven. Every man and every woman is a star. Every number is infinite; there is no difference.

Secrets of the Chariot

Much of the labour of the Great Work is to make the frail human personality a suitable vehicle so that spiritual influence does not overwhelm it. The preliminary work is to train the mind and increase the power of concentration—to hold an image steady in the mind like an unwavering flame. The mental powers are then applied to the building of a chariot or Merkebah, as depicted in the Tarot trump. The chariot is the vehicle of will, called the resurrection body in esotericism. By this vehicle, the paths of the Tree of Life may be negotiated. The Holy Ghost and Holy Graal are cognate terms. The Cup of Babalon or Binah is the receptacle for the feminine holy spirit, Khu or Shekinah. The resurrection body is introduced in the (Egyptian) Book of the Law, I: 8,

The Khabs is in the Khu, not the Khu in the Khabs.

The magical power of the 18th path is the Power of Casting Enchantments.[2] Taken at the most superficial level, the Power of Casting Enchantments is suggestive of degraded traditional forms such as witchcraft or voodoo, where village folk consult with their shaman to settle a dispute with their neighbour, get revenge on someone that has slighted them, or perhaps cook up a potion to help them seduce someone. More seriously, the ancient Egyptian image for Cancer is the scarab beetle, Khephra. Khephra, or the sun at media nox, is the supreme totem of enchantment and of all transformations. Khephra is the neter (principle) of Becoming. Khephra is self-created, self-born, self-becoming, ever-changing and ever-living. Khephra is the Becoming—the transformative principle itself. Through this principle the soul is able to pass through the underworld and undergo transformation into a radiant Khu or Phoenix—the resurrection bird or Chariot to the Stars.

Influential occultists of the 20th century were deluded by the pseudo doctrine of the Theosophists, where the individual ego is supposed to ‘reincarnate’ for life after life. Aleister Crowley, Dion Fortune and others readily embraced the Theosophical notion as it provided almost limitless possibilities for story-telling. Fictional characters could travel back and forth in time; a magician could be anything they want to imagine in a ‘past life’—very often a priest or priestess from the sunken isle of Atlantis with incredible supernatural powers, or a mysterious adept endlessly reincarnating into new earthly lives to fulfil a supremely appointed destiny. If taken in any way seriously this is flattering for the individual while leading the aspirant into a psychic cul-de-sac. The misinterpretation of ancient Greek and Hindu scriptures was later packaged and sold to naïve Westerners by New Age entrepreneurs.

Acceptance of the Theosophical doctrine has prevented Crowley and his followers from interpreting the Book of the Law on vital matters, such as, ‘‘What happens to the soul after death?’ ‘What must an Initiate do to prepare for this?’ Even the aim and purpose of a Great Work becomes obscure once the nebulous philosophy of the New Age movement is accepted. Crowley, who was heavily influenced by Madame Blavatsky, proclaimed that Thelema is a ‘New Law for Humanity’. It is in fact the very ancient law and eternal truth that governs Initiation and soul survival. Esoteric Thelema is identical with the Setian Gnosis of ancient Egypt, and in particular, of the Setian cult of Mentu in Thebes of the 26th Dynasty.[2] Egyptologists have served to further obfuscate the truth by placing emphasis on the late dynastic Osirian mummification process. Yet even The Egyptian Book of the Dead (so-called) reveals a consistent ancient Egyptian doctrine of the afterlife. The work of one unique incarnation determines whether the soul survives the second death or suffers annihilation through the dispersive forces of the underworld. Esoteric Thelema continues the ancient Egyptian Setian Gnosis where initiation and the life of the soul after mortal death are ideas so intimately related as to be identical.

1. The Egyptian Tarot of Thelema zodiacal trumps may be viewed here.

2. The source of the Thelemic transmission mediated by Rose Crowley in Cairo in 1904 was the Stele of Revealing, the funeral stele of a priest of the cult of Ankh-af-na-khonsu, Thebes, 26th Dynasty (around 500 BCE). See Babalon Unveiled! Thelemic Monographs [Ordo Astri].

© Oliver St. John 2013, revised 2022
The Khephra Scarab is from the Egyptian Tarot of Thelema.

Related Articles: all in Tarot category