Sokar (or Seker) means ‘pure’. Depending on how the name is spelled, there is also a link with the principle of power itself (sekhem), for Sokar is Lord of Death and Resurrection. He is sometimes depicted as a mummified hawk and at other times as a white mound or shroud surmounted by a black hawk’s head. 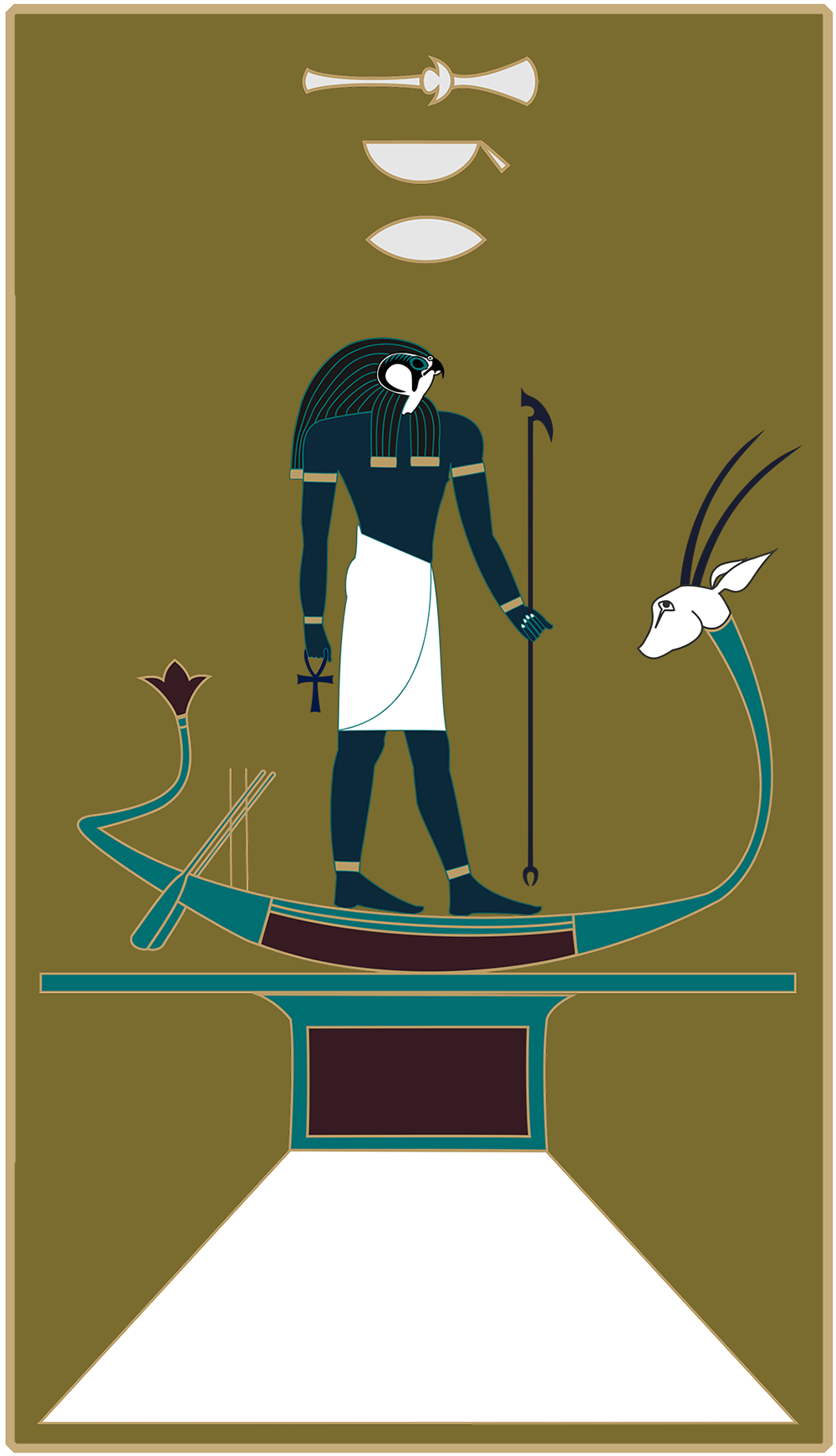 According to EA Wallis Budge, Sokar was “originally a power of darkness, or of the night”.[1] As such, his attributes are identical with those of Set. Sokar is called the ‘great god, who came into being in the beginning, he who resteth upon the darkness’. As such he was ancient even when the Pyramids were built, as are his rites. Among other of his titles are ‘He who raises up in the desert’ and ‘Dweller in the secret place, king of eternity, power of the everlasting’. The region of the underworld particularly associated with Sokar is Imhet (or Amhet), meaning ‘Abode of the Desert’. He is also ‘Lord of the gates of the tomb’ as the opener of the sealed entrances to the labyrinthine Necropolis. As lord of transformations in the underworld he is depicted as winged and standing on the back of a serpent. He is sometimes depicted as crowned with a disc and the twin plumes of Ma’at.

Sokar’s chief cult centre was at Memphis, which was also the principle cult centre of Ptah. Sokar was frequently merged with the attributes of Ptah, the self-created craftsman of the gods. Silver bowls and artefacts made from metal were frequently consecrated in his name. He was associated with agriculture as well as irrigation. His cult followers did rites of purification and embalming in his name.

The fiction writer Algernon Blackwood was able to convey some profound insights into the soul of Egypt, and of the vast expanse of the desert wilderness. In ‘Sand’, his writing was inspired by his experiences of the desert near Cairo.

Through this sand which was the wreck of countless geological ages, rushed life that was terrific and uplifting, too huge to include melancholy, too deep to betray itself in movement. Here was the stillness of eternity. Behind the spread grey masque of apparent death lay stores of accumulated life, ready to break forth at any point. In the Desert he felt himself absolutely royal.

And this contrast of Life, veiling itself in Death, was a contradiction that somehow intoxicated. The Desert exhilaration never left him. He was never alone. A companionship of millions went with him, and he felt the Desert close, as stars are close to one another, or grains of sand.

Of all the rites of Sokar the procession of the hennu boat is perhaps the most striking and unique to him. The Sokar boat or hennu represents the sun’s journey by night through the underworld. The image of the hawk-headed Sokar was placed in a boat shaped like a sledge with runners. The boat was never intended to sail on water, it was built to be carried, and was said by some to be steered by the dead. If so, then the navigation took place among the stars, for the hennu was an astral vessel.

Depictions of Sokar in the hennu boat sometimes show his hawk’s head only, while his body is covered in a white, luminous shroud. According to Antoine Gigal, the shroud was made of special luminous cells.[2] The luminosity is the covering of ‘all that is created and all that can ever be created’. On the day of the festival of Sokar, the high priest raised up an ark or small wooden shrine at the moment of sunrise and placed it on the hennu boat. The shrine and hennu boat was then pulled along across the sands in a circular procession about the temple of the god, mirroring the revolution of the sun, planets or other celestial bodies.

The higher end of the sledge was fashioned in the shape of the head of an oryx, a species of desert antelope and the original type of the unicorn. The hennu boat was in the charge of the High Priest of Memphis, called Ur-kherp-hem, ‘Great One of the Hammer’, a reference to Ptah as cosmic creator god.

We associate Sokar with Scorpio and the month of October, which according to the alchemists is the only time when iron can be turned into gold.[3] The desert oryx, a gentle creature unless attacked, seems an unlikely association. However, Scorpio’s twin sign in the Zodiac is Taurus, denoting a horned beast, and October embraces the Sun’s entry into Sagittarius, the Centaur.

‘Oryx’ is an anglicisation of the Greek ορυξ, derived from the Libyan orus, ‘digger’. The white Arabic oryx is known to dig out a bed in the sand to keep cool. The desert beast can survive for long periods without water, like the camel. It can detect rainfall at a great distance and can travel thousands of miles in pursuit of the water.

The hieroglyphic determinative for ‘oryx’ is frequently mistaken for that of a goat. The Egyptian name is ma’au hetch, denoting the bright white colour of the Arabian species of oryx and the straightness (ma’at) of its horn. The ma’au is cognate with ‘truth’, ‘regularly and always’, ‘purity’ and ‘a gift’. According to Budge it is also the name of ‘a star’ and ‘a god’.[4] Taking all into consideration the star may be Regulus, heart of the Lion constellation. Ma’au is the name of Apep in the form of a lion-serpent, the most ancient astroglyph for Leo. The lion-serpent image combines Leo (lion) with Scorpio (snake). The eagle is a further symbol of Scorpio frequently paired with the lion in alchemy. Hetech means ‘white’, ‘shining’, and the name can be spelled with a stylised staff and shen loop for ‘eternity’. The name is etymologically linked with ‘elders’ and ‘nobility’. The Egyptian name of the oryx is usually spelled in hieroglyphics with the sickle ma’a, ‘Lion of Truth’. The same hieroglyph, in combination with the hetch mace, denotes any sharp instrument as well as the action of digging or piercing.

Sokar and the Unicorn

The oryx is mentioned six times in the King James Bible. The Aramaic re’em is mistranslated there as ‘unicorn’. The same word was translated into Greek as monokeros (μονoκερως) in the Septuagint. In Psalm 22: 21, the word karen, meaning ‘horn’, is written in the singular form. According to Jewish folklore, when King David was a shepherd he was carried up into the sky by an oryx after he mistook its horn for a mountain. He is then saved by the intervention of a passing lion, which causes the oryx to bow its head in respect. Another legend has it that Noah strapped the long, sharp horns of the oryx to the Ark so the animals inside could breathe.[5] The transposition of the tale of Noah’s Ark from that of the exceedingly ancient hennu boat is fairly obvious. There were long held associations between the oryx, the lion—with its connotations of nobility—and mountains, as ‘high’, ‘strong’.

The Aramaic re’em (RAM) has the value of 241 and is a metathesis of aramea (ARM), ‘mountain or mountainous place’. It is also equal to ‘speak forth, command or give a word’ (AMR) and is the root of Genesis I: 3, “And the Elohim said, Let there be light: and there was light”. The number 241 is that of Albarah, ‘wings of God’, which is a term used in alchemy for Mercury or Quicksilver. As with other species of antelope, the oryx is able to run at great speed.

The word ‘oryx’ is used as a name for a stonemason’s pickaxe, owing to the strength and sharpness of the creature’s horn, and possibly owing to the fact that the oryx sometimes uses it to excavate the desert sand. In Greek it has the value 630, equal to ‘Holy Spirit’ (RVChA QDIShA) and Seraphim (ShRPIM), ‘fiery serpents’.

The oryx carries the secret of the Lord of the Necropolis in its heart and its name, which is a reliquary for a vast tract of forgotten knowledge. The Golden Dawn named the initiate of Hod, the 8th sephira, Monokeros de Astris, ‘unicorn of the stars’. Hod is the Temple of Water on the Hermetic Tree of Life, and at the same time corresponds to Mercury. The unicorn is thus an apt cipher for the way of returning through the double gates of the underworld to the abode of the Gods.

Lord of the Necropolis

Sokar is and has always been Lord of the Saqqara Necropolis near Memphis and Giza. In predynastic times, a labyrinth was dug out of the desert sands beneath the Saqqara complex. Finely fashioned, highly polished granite arks weighing upwards of 50 tons were placed in cavities there. The arks or vessels are cathodic, for they are polished like glass on the inside. There are no historical records of the builders of these impossible artefacts but they are thought by some to be the ‘old ones’ or ‘elders’ referred to in sacred texts, or their descendants.

The Great Old Ones is a term used in scriptures referring to an elder race that pre-existed that of the human, indistinguishable from gods. Either they, or their descendants, are referred to in the book of Genesis as Nephilim or ‘giants’, ‘men of renown’. Between Memphis and the Saqqara Necropolis was once a sacred acacia tree. One of the Egyptian names for Memphis is Ankh-Tawy, ‘Life of the Two Lands’. Thus the Tree of Eternity spreads its roots and branches between the worlds of the living and the dead.

1. Budge, Gods of the Egyptians Vol. I, pp. 504–505.
2. The Mystery of the Sokar Hennu Boat, Antoine Gigal, 2013. From Gigal Research—Archaeological and historical researches.
3. The month of Scorpio (October–November) is the ‘death’ of the year in the northern hemisphere of the globe. Thus the Tarot card Death XIII, corresponding to Scorpio, is called Child of the Great Transformers: Lord of the Gate of Death.
4. Budge, An Egyptian Hieroglyphic Dictionary, Volume I, pp. 270 A.
5. Robert Graves, Hebrew Myths: The Book of Genesis, Chapter 7, ‘The Reem and the Ziz’.

The portrait of Sokar at the head of the article is from Egyptian Tarot of Thelema Sokar XIII. The Tarot card and its full description can be viewed here at Ordo Astri.