The Thoth Tarot trump for Scorpio is Death XIII, which is placed on the 24th path of Nun on the Hermetic Tree of Life. The esoteric title of the key is Child of the Great Transformers: Lord of the Gates of Death. The dual nature of Scorpio is here depicted: A skeletal figure is wielding a scythe. With the sweep of the scythe, bubbles appear in which new forms are created. 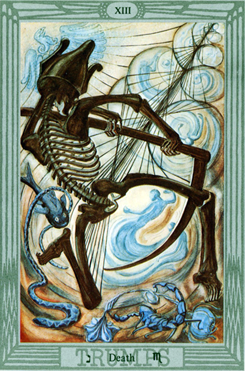 In nature, life and death are two sides of one coin. ‘Death’ is therefore shown here as a dancing figure, destroying form and structure while simultaneously recreating it. The card is a symbol of transformation and regeneration, apt for the months of October and November in the northern hemisphere. In terms of magical alchemy, the figure sums up the chemical changes called putrefaction. It is said that the base metal iron can only be changed into gold during the month when the Sun traverses Scorpio. In astrology the fixed water sign Scorpio is ruled by fiery Mars, the energy that breaks down form into its elements so that new life can be created. Iron is the Hermetic correspondence of Mars, while gold is that of the Sun.

Scorpio has three symbols: the Scorpion, Eagle and Snake. The Hebrew letter nun, ascribed to the path of Scorpio, superseded the much older letter nahash—‘a serpent’—for in later times the serpent became identified with evil. While the Scorpion symbolises the voluntary submission to inevitable change, the undulations of the Snake symbolise the dual dance of life and death. The Eagle is said to be the higher form of Scorpio. It has always represented ascendancy over matter or material form. Putrefaction gives off gas or vapour, and this has its parallel in occultism with spirituous non-material substances that are nonetheless tangible to clairvoyance. Ectoplasm or etheric matter is known to act as a medium between the physical world and more tenuous planes of existence.

The head of the Eagle is used as a symbol for alchemical distillation—it therefore represents the sublimation of gross matter. Scorpio is the 8th house or area of influence in astrology. The 8th house governs matters of sex, death and legacies. It therefore sums up all of our memory and experience; at the same time the very nature of Scorpio urges us towards change and transformation.

The 24th path of Nun connects Tiphereth, the sphere of the Sun, with Netzach, the sphere of Venus. The 24th path is called the Intelligence of Resemblance or Imaginative Intelligence. The root of the Hebrew word for ‘resemblance’ or ‘imagination’ (DMINVI) means ‘blood’. It is the self-replicating formula of all created beings personified by the ancient Egyptian dwarf god Besz. The Imaginative Intelligence works from the centre of the self in Tiphereth towards the desire plane of Netzach. Thereby, new modes of expression, vehicles for the self, are brought forth. When ascending the Tree, such vehicles are transcended and broken down—thus the full title of the Tarot trump, Child of the Great Transformers: Lord of the Gates of Death. The activity of the 24th path comes through the power of projecting mental images. When one attempts to fulfil desire on its own plane, great emphasis is placed on the action or ‘doing’ aspect of the human will. Unwitting obsession is all too frequently the result. The magical power of the 24th path is that of Necromancy.[1]

1. Abridged from the entry for the 24th path of Scorpio, The Flaming Sword Sepher Sephiroth [Ordo Astri].