Margaret Bruce is as unknown now as she was when living and working at her isolated farm retreat deep in the countryside. There is next to nothing about her on the Internet. Yet she wrote and privately published what may be the most original and instructional book on the subject since Eliphas Levi’s Transcendental Magic.

No sooner is a temple built to God, but the devil builds a chapel hard by (Herbert)

Belief  alone makes your world what it is. You have been conditioned to believe in illusion. Let me teach you to believe in reality!

Those who see me as the Sphinx, propounding riddles, are those who have difficulty understanding most other things in life. But others may say, as was said of Lady Godiva, “She reveals too much!” Let them take comfort however. The greatest Occult Secret of all, proclaimed in ringing tones from every rooftop in the land would be perfectly safe.

Few occult students appreciate the arrogance of their demands. Many an enthusiastic young hopeful, armed with regalia, ritual and Words of Power, sets out to invoke some Cosmic Entity only to find that his boss wants him to work overtime that evening. The hilarious incongruity of the situation fails to register and his appointment with the Cherubim and Seraphim is postponed sine die while he helps with the stock taking.

The following legend is emblazoned inside the front cover of the book, Margaret Bruce’s coveted collection of Tried, Proven and Practical Natural, Goetic, Theurgic, Transcendental and Illusory MAGICK as inherited, professed and practiced through seven generations from the year of Our Lord 1777 to the present day.

N the Temple of HATHOR served a priest called Nefer-hotep. His path from Zelator to Magus took threescore years and led through realms of Fire and Ice and many ordeals. One day a woman gave alms at the Temple. A group of actors and clowns, seeing the coins, were filled with envy and greed. Exchanging their motley for priestly robes, they banged on drums and blew trumpets to attract the crowds. “Miracles and Blessings for sale!” they shouted; and soon the simpletons in the town were flocking to buy. When the simpletons found they had been swindled, the clowns were far away, selling more Miracles to more simpletons.

The clowns grew ever bolder in their new trade and their boasting grew sillier. Each tried to outdo the other and they squabbled and fought among themselves. “I can make the old young again!” cried one. “I can transform goats into maidens!” screamed his rival. Until even the simpletons could see that, for all their priestly garb, the clowns were nothing more than clowns.

A thrice told lie is believed by the liar, and the clowns began to believe they had miraculous powers. Thus came their downfall. For Nefer-hotep was hated by the Demons he had exorcised in the past but they could not harm him because his Heart, when weighed in the balance of THOTH was not one breath lighter or heavier than the Sacred Feather of MAAT.

But the Demons saw the clowns in priestly garments and smelled the corruption beneath the stolen robes of office. So entered the Demons into the souls of the clowns and destroyed them, thinking they had destroyed their enemy Nefer-hotep. The flesh of the clowns fell from their bones and the serpent made her nest in their skulls until, in time, the bones themselves became dust; and this dust mingled with the sands of the desert and was borne upon the wind. Their names, if names they ever had, are forgotten.

And a new band of strolling clowns and actors approaches.

And the Demons wait with infinite patience.

Each chapter of MAGICK by Margaret Bruce, her only (known) published work, is a single page, lavishly illuminated with antique line drawings and arabesque motifs. The pages are not numbered but the text is printed on different coloured papers, as Bruce explained in her Preface.

This is not simply a book of Magick, but a Magick book. The pages are unlimited by numbers and the Magick dwells in the pauses between the reading of each word and the turning of each page. Just as music is mere noise without the measured periods of nothing between the notes and chords, so the art and craft of Magick comprises the placing of apparent nothings in dynamic relationship with apparent realities in order to create a desired result. In order to do this, it is necessary to learn the difference between illusion and reality—a task which may be attempted by perhaps one suitable person in a million. Of a million such aspirants, one partial success might be an optimistic estimate. The ability of the reader to comprehend this basic fact is all that limits the Magick of this book. 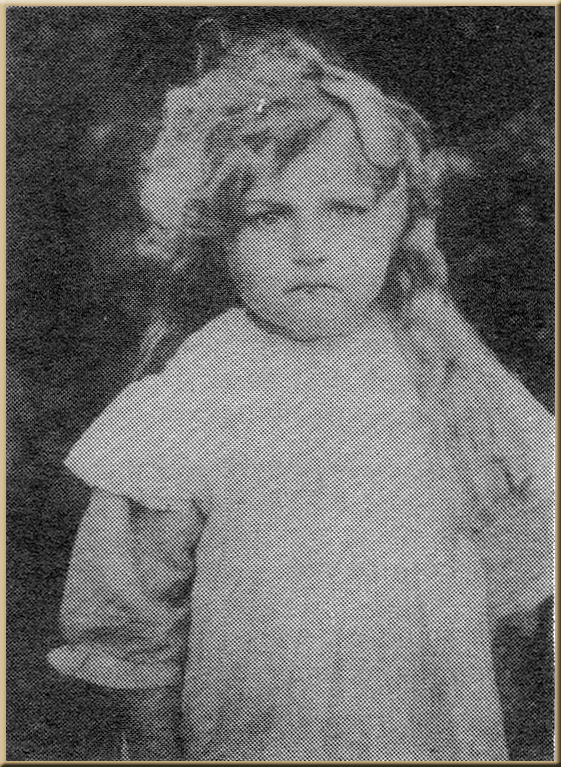 When I came back from Lyonesse with magic in my eyes… The photograph (left) is of Margaret Bruce as a child of six years. It is placed with ‘Images Within Images’, on the centre pages of the book—which was “written, designed and printed from the outsides towards  the middle, the page numbers are only in your mind”. What little is known about Margaret Bruce derives either from what she disclosed in her book and letters, or that resides in the memory of those who were fortunate to have corresponded with her. She was a recluse, living in a remote farmhouse surrounded by rescued animals, and would not entertain human visitors. All proceeds from her apothecary and the book went to Margaret Bruce’s Animal Sanctuary for neglected and ill-treated farm animals and wildlife. Her grandfather was a member of the Hermetic Order of the Golden Dawn and collected a huge store of arcane knowledge, including secrets of incenses, oils and all manner of potions and charms. It is clear that he passed on this knowledge, gathered from translating countless manuscripts and much more besides, to his daughter.

According to Margaret Bruce, some of the recipes were from Voodoo Queen Octavia Labeau.

When she visited Britain in 1909 to demonstrate clairvoyance to the Spiritualist groups she stocked up with perfumes from my grandparents and allowed my grandmother to copy some 600 recipes and spells from the hand written minute-book she carried on her travels. These recipes, translated from the curious Creole French of Madame Labeau’s original, now form part of my own hand written grimoire that runs to several volumes.

It is not known whether the precious grimoire still exists. We first knew of Margaret Bruce through Dolores Ashcroft-Nowicki, co-founder of the SOL Association, who gave us the recluse’s address in Ireland. From there we requested her catalogue and soon became regular customers. Her incense, oils and other products were of unsurpassed virtue. The little book, MAGICK, is among the most highly valued of rare books in our library.

All sanity, all reality, all nature is, together with magick, retreating from the suffocating menace of mankind. If you wish to discover real magick perhaps you should hurry!

1. Tarot Card Number One
2. Epilogue
3. Magick and the Supernatural
4. Preface
5. Voodoo—Religion or Racket?
6. Magick and Madness

Related articles
Magick of Voodoo: Ode to the Crossroads