The Thoth Tarot trump for the 19th path of Leo the Lion is Lust XI. The Sun, the Solar Light, is the ruler of Leo. The esoteric title of the trump is the Daughter of the Flaming Sword. 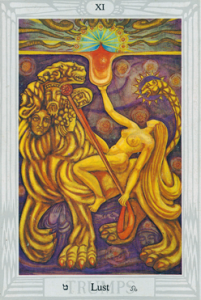 The Tarot trump depicts our Lady Babalon riding upon the Beast of Revelation. The Sun cradled by the Moon is a form of the Holy Graal. Nuit and Hadit, cosmic principles of space and consciousness, here find material expression as the Woman and Beast, Eve and the Serpent.

Some have described the early Tarot of Marseille image of the 11th Tarot key as a woman closing the mouth of a lion, though it may equally be seen as woman opening the mouth of a lion. The Egyptian ceremony of Opening the Mouth (of the deceased), for example, enabled the king or initiate to pass through the duat or underworld and navigate a path to the imperishable stars. This is an image of the opening of Da’ath, the Gate of Knowledge. It requires considerable spiritual strength and courage as there is a high risk of obsession by the flow of images on this high-powered path.

From ‘closing the mouth’ comes the association with the magical power of the 19th path of Leo, the Taming of Wild Beasts. The ability to converse with and understand the secret languages of wild creatures is listed among the powers of the ‘fallen angels’ or spirits of The Goetia. It is not necessary to evoke any Goetic spirits in order to converse with birds and other wild animals, though the method is not one that can be taught or learned in the ordinary way.[1]

Leo and the Flaming Sword

The letter of the 19th path of Leo the Lion is teth, ‘a serpent’. The early Semitic and Cretan forms of the letter depicted the circle cross, a marking of space and time. The symbol is identical to ancient Egyptian hieroglyphic determinative denoting the ‘place itself’, the terrestrial location. The Egyptians used the ‘Mark of the Beast’ as a protective amulet. It was often associated with Sekhet, the lion goddess and Tauret, the keeper of the Net.[2] The crossing of the lunar 13th path of the Priestess and the solar 19th path of Leo the Lion is a cognate image.

The 19th path of Leo the Lion connects Chesed, the sphere of Jupiter, with Geburah, the sphere of Mars. The path is called the Intelligence of the Secret of all Spiritual Activities or the Occult Intelligence. The 19th path is the first that is wholly beneath the Abyss when descending, and the last before the Abyss when ascending the Tree. It is therefore the secret ruler and governor of all that is below, even as it receives the influence (mezla) from that which is above. The secret of the path is that visible nature veils or conceals the numinous source of all.

The magical power of the 19th path is the art of deriving oracles from snakes and women. The power of hypnotism is also associated with the snake. To be saved by Crowley is no better than being sent to hell by Jesus.

1. Those who imagine this Tarot image to merely veil a ‘formula’ of sexual magick are naturally excluded from such conversations.

2. The Net is the cosmic matrix for form and is closely identified with Neïth or Nuit the star goddess. The Net has a dual function. On the one hand it opens a path to the stars for the justified soul. On the other hand, it may trap the soul in the underworld.

The Egyptian Tarot of Thelema trump for Leo is Sekhet XI. The card and its description may be viewed here at Ordo Astri.