The Crowley-Harris Thoth Tarot trump for Gemini is The Lovers VI. The esoteric title of the trump is Children of the Voice: Oracle of the Mighty Gods. The ‘voice’ is the oracle of Understanding and Wisdom. On the Tree of Life, these are Binah and Chokmah, personified as Babalon and the Beast, Sophia and Logos. 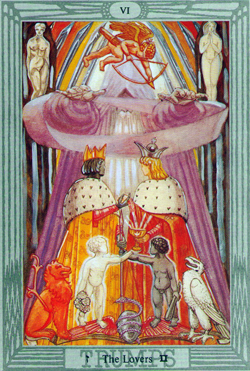 The 17th path of Gemini is the seventh from Aleph. The letter zain (or zayin) is the sword separating the subtle non-material matrix into twin streams of time and space that pour forth from the Abyss. The 17th path of Gemini or the Lovers expresses the resolution of reason through the union of love under will. It is the creation of the world and its magical recreation through the Great Work.

The 17th path of Gemini connects Binah, the sphere of Saturn, with Tiphereth, the sphere of the Sun. The path is called the Intelligence of Sensation or the Disposing Intelligence. It is also called the Foundation of Tiphereth in the plane of the Supernals—since its root is in Binah and its termination in the centre of the Ruach intelligence. The idea of ‘sensation’ derives from agitation, stirring or seething (ha-regash). The sword of intellect is much troubled by the dualistic contradiction inherent in its own nature, yet it is this turbulent state of affairs that is necessary before any Great Work can begin. The agitation of the sword of zain is only calmed when the meaning of every phenomenon is understood. When every phenomenon is clearly perceived then, in the words of the Oracle ascribed to Zoroaster,

After all the phantoms have vanished, thou shalt see that holy and formless fire, that fire which darts and flashes through the hidden centre of the universe; hear thou the voice of fire.

The duality of the 17th path of Gemini is expressed as Sol and Luna in alchemical terms. The Tarot trump images this forth as an alchemical wedding or mystic marriage presided over by Hermes-Thoth or Mercury. The instruction concerning the three forms of light, Aub, Aur and Aud, as posited by the Hermetic Order of the Golden Dawn, requires correction. The Order’s teaching identified the phallic light of Aur with rational consciousness, the ‘light of solar day’. In fact, the sun’s power waxes and wanes through the year in the same way that the moon waxes and wanes over the course of one month. It is the interweaving of the twin serpents, the dual light of Aub that produces phenomena. The ‘fixing of the volatile’ is when the phallic (‘imaging’) pillar of the Aur light arises in the shushumna or middle pillar in the occult anatomy. The fluctuation of the twin serpents, Sol and Luna, is stilled or ‘slain’ by the will to Silence. The Aur light then returns consciousness to its source, the magical Aud or Starlight of Nuit.

The magical power of the 17th path of Gemini is the Power of being in two or more places at one time, and of Prophecy.

Adapted from The Flaming Sword Sepher Sephiroth, comment on the 17th path.

The Egyptian Tarot of Thelema trump for Gemini is Shenut VI.