Aleister Crowley preferred to cast himself in the mould of the Eliatic Greek school, going so far as to adopt the argumentative methods and intellectual idealism of Socrates. 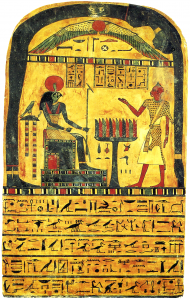 The (Egyptian) Book of the Law, Liber AL vel Legis, rails against such reasoning and argument. The rationalist science of today has its roots firmly immersed in the clay of classical Greek dogma. Thus scientism is not only against nature but has also tricked mankind with its stream of inventions. Through technological means it has propagated lies and confusion. Its sole requirement is that we believe and obey.

Natural law (or Thelema) is in fact esoteric. Esotericism is at the core of the Book of the Law, but it is precisely the logic-defying nature of this doctrine that leads Thelemites to embrace what is an essentially isolationist interpretation of the path.[1]

The aim of magick is, or should be, no different from the goal of yoga, ‘union with God’. Religion however, as with scientism, is about belief. The value of belief is in the telling of a good story but that is ultimately a bar to Gnosis. The ancient Egyptians had no word in their language for ‘religion’; the concept did not exist for them. The Book of the Law is a transmission from an ancient Egyptian source. As such, it is a knowledge stream that vastly predates both science and religion. According to the Book of the Law, III: 2,

There is division hither homeward; there is a word not known. Spelling is defunct; all is not aught. Beware! Hold! Raise the spell of Ra-Hoor-Khuit!

‘All is not aught’ is a succinct though subtle refutation of certain streams of the Eastern philosophy as subverted by Western academic atheism. The circle of ‘all’ is the infinite expression of all possibility (Nuit), as defined by the point (Hadit), the esoteric factor. The absence of sense objects is not the same as ‘nothing at all’. In Qabalah, the source of all, AIN, is called ‘negativity’, as it is beyond description. Yet even AIN has a dual meaning, for it is the eye (A’ain) of the beholder. Postmodern or faux Non-Dualism declares that ‘everything is true and equally untrue’.

The statement declares a ‘truth’ (untruth) that is descriptive only of human reason, denying even the possibility of reality. As symbol, it admits only to relativism, and falls back ultimately on self-determinism and self-love as the solution to the dilemma it produces.[2]

Causal determinism originated with Socrates, who demanded there should be a naturalistic explanation for all sacred myths.[3] The prevailing dogma of scientism owes to this ancient Greek argument. In the 19th century, Schopenhauer put forward his doctrine of self-willed intellectual determinism in The World as Will and Representation (1818). This is the basis of Crowley’s rationalist interpretation of the Law of Thelema. It is the basis of today’s academic psychologisation of the mysteries. The postmodern school of the ‘Left Hand path’ also requires causal determinism as its philosophical basis.

The dogmatic assumption is that there is a natural order of the cosmos that is rationally comprehensible (and so limiting). Such a natural order is not even differentiated from, say, social order or convention. It then follows, if one accepts this, that one must isolate or separate one’s intelligence from this situation to resolve the paradox with free will and achieve meaningful individual expression.[4]

Sri Ramakrishna Kathamrita, the Hindu sage and devotee of Kali, held a view that reconciled the inevitable nihilism and isolationism of rational Non-Dualism with the apparent emotionalism of devotional mysticism.

God has form and He is formless too. Further, He is beyond both form and formlessness. No one can limit Him.[6]

Crowley and the Equinox of the Gods

It is probable that Crowley received the writing of the Book of the Law on the 1st, 2nd and 3rd April 1904, not the 8th, 9th and 10th as he subsequently claimed. This was first noted by Kenneth Grant, who studied the diaries and holograph MSS of Crowley at first hand.[7] The time and date of Crowley’s birth is a documented fact. By his own admission his recorded time of birth indicated that Cancer, ruled by the Moon, was rising on the hour.[8] Crowley much preferred the fiery solar-masculine sign of Leo the Lion over the watery, feminine-lunar Cancer the Crab. He therefore simply changed the time of his birth to suit.

Does it matter? If it matters at all, then it matters only for the purposes of understanding how practical magick works. When a magical operation is performed on the Equinox of Aries (20th March, the initiation of the Cairo working), the fulmination of that work arrives with the full Moon. In 1904, the full Moon in Libra very nearly coincided with Easter (Friday 1st April), and there was a lunar eclipse so that any corresponding events would be marked ever more deeply.

None of this need be of any concern to historians or scholars of the life and times of Aleister Crowley. Let it be then, that Crowley wrote down the book on the 8th, 9th and 10th April 1904. Then we can all sleep safe in our beds.

Crowley and Ouarda the Seer

Should it bother us that Crowley suppressed the truth concerning the role of his wife, Rose or Ouarda the Seer, in the reception of the Book of the Law? As she was the mediumistic agent throughout the Cairo Working, Rose may very well have received and telepathically (or otherwise) transmitted the book to the scribe Crowley. This would account for the instructions on practice given him in the middle of the second chapter that he clearly refused to obey. It would account for the fact of Rose’s handwritten notes added to the manuscript, not to mention that even by his own account the ‘Beast’ had to consult with her concerning his anxiety over the neologism, ‘unfragmentary’ (Liber XXX, I: 26). After that, the tone of the book becomes increasingly cryptic and menacing—hence the second verse of the third chapter that we have quoted.

Some have interpreted, “there is a word not known” (AL, III: 2), as meaning that Crowley somehow failed to utter a word to inaugurate the New Aeon. The Aeon that subsequently ensued was abortive, so it is said. This has deluded some (including perhaps Crowley) into thinking an actual word—a word that can be spelled or spoken—is a necessary part of the equipment of a Magus that is somehow in charge or governance of an entire epoch in the history of human civilisation. Some have posited that an Aeon of Ma’at swiftly superseded Crowley’s Aeon of Horus.[9] This was later qualified by Kenneth Grant as a dual Aeon of Horus-Maat. Grant also made much mention in his books and letters of a ‘Wordless Aeon’. Others would have it that all aeons in time are presided over by Horus and Ma’at in both ancient Egyptian and astrological terms. The balance of the year is Aries and Libra. There is nothing in the Book of the Law about any ‘New Aeon’. All of this has introduced some bewilderment in the minds of those who wish to find truth in written words and historical facts, so called. According to Liber AL, III: 75,

The ending of the words is the Word Abrahadabra.

ABRAHADABRA adds Qabalistically to 418. It appears in the Key of Solomon as a spell for invisibility; one of the original forms of the spell was ABRAKALA.[9] Crowley’s favoured interpretation was typically solar-phallic, ‘Father-Sun-Satan’. However, the seven-lettered ABRAKALA expresses the power of the divine creatrix, summed up in 256 or 16 x 16, the shade of the full Moon. There are three colours for the face of the White Goddess, white, black and red. She is either visible, invisible or in eclipse. During eclipse, a shade appears ahead of time, so to speak, thanks to the intervention of the body of the earth. Thus the powers of a lunar eclipse include prophecy, divination and oracular utterance.

One thing we can be certain of is that Rose Edith Kelly (Rose Crowley) was the Pythoness and oracular seer that brought us the Book of the Law.

1. From ‘Lapis Philosophorum’, Babalon Unveiled! Thelemic Monographs [Ordo Astri].
2. ‘Lapis Philosophorum’ [ibid].
3. See R.A. Schwaller de Lubicz, Sacred Science (pp. 18, Inner Traditions International) and Plato’s Phaedrus for the naturalistic explanation that Socrates gives for all sacred myths. The interested reader is encouraged to read the Foreword by Robert Graves to his second edition of The White Goddess, as it is relevant in the present context [Faber and Faber].
4. ‘Lapis Philosophorum’ [ibid].
5. Isolate Intelligence is the core doctrine of some postmodern Left-hand path occult organisations. The Temple of Set, founded by Michael Aquino, is a notable example as Aquino coined the term. Zos Kia Cultus, ‘Self-Love’ and ‘As-If’ cults also posit the Isolate Intelligence or ‘single Self as supreme reality’.
6. Recorded by Sri Mandiram, March 11, 1883: Conversations with Sri Ramakrishna [Vedanta Press].
7. Kenneth Grant, Beyond the Mauve Zone p. 34 [Starfire Publishing].
8. Confessions of Aleister Crowley, by Aleister Crowley.
9. A disaffected disciple of Crowley, Charles Stansfeld Jones (Frater Achad) posited an Aeon of Ma’at as commencing from 1948 e.v. Cf. The Incoming of the Aeon of Maat [Starfire Publishing].
10. See also ABRQRBA, another less corrupt form of ‘Abrahadabra’.