The Egyptian Tarot of Thelema trump assigned to Capricorn and the 26th path is Set XV.[1] The esoteric title is Lord of the Gates of Matter: Child of the Forces of Time. The Devil portrayed in most Tarot decks is a hybrid creature with bat-like wings, sometimes thought to be Baphomet, the goat-foot god that the Knights Templar were falsely accused of worshipping by the Inquisition of King Philip IV of France. 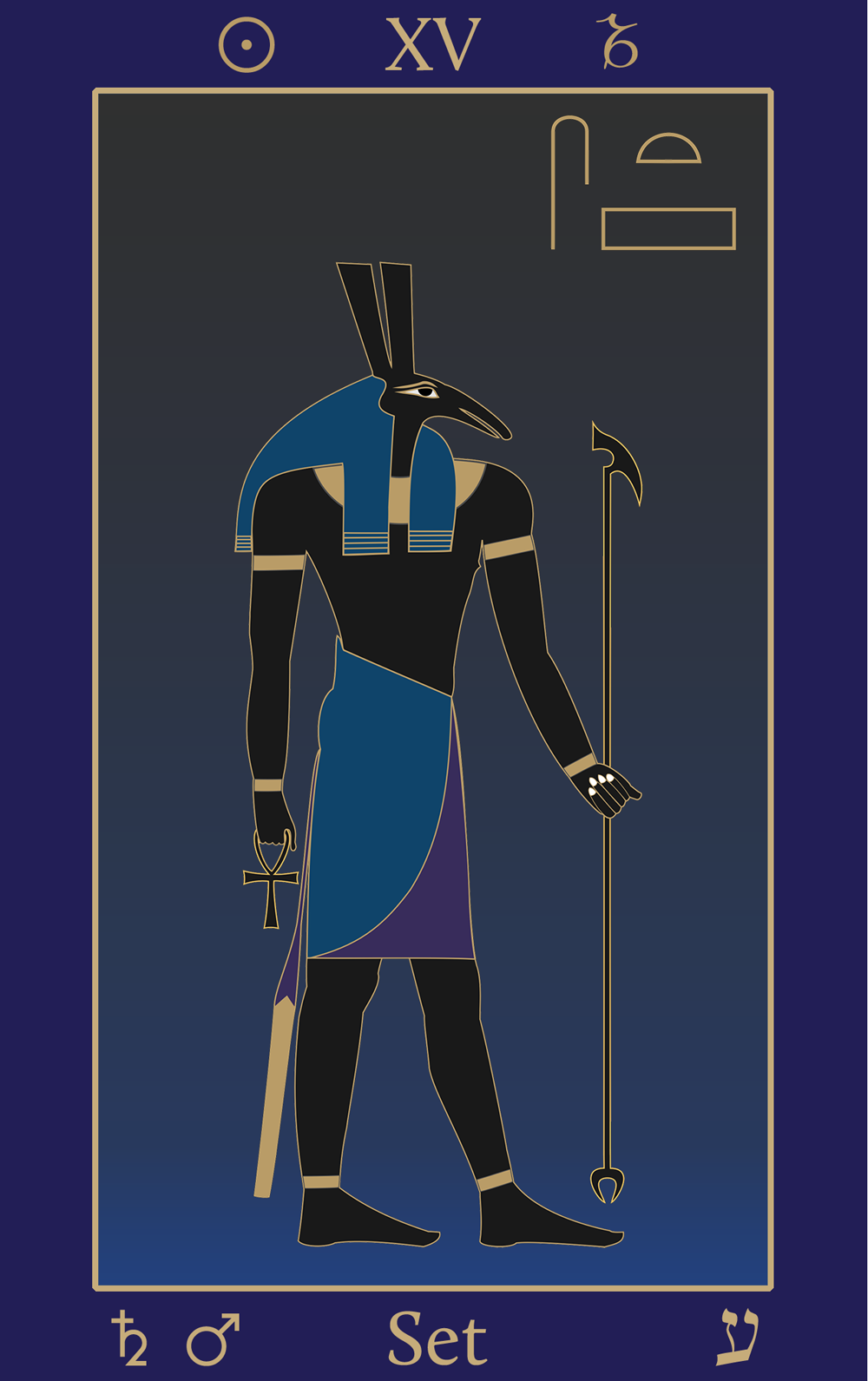 Saturn, the planetary ruler of Capricorn, is identified, among other things, with the ancient Egyptian god Set. Set takes on many forms, but the one particularly relevant here is the black god of the desert south of Egypt, where the heat of the sun is at maximum intensity and hot winds blow in from the Sahara. The desert symbolises the wilderness of the soul that must be entered before any spiritual truth is known. The Aramaic for the planet Saturn is Shabbathai—and from that word was derived the lurid ecclesiastical propaganda that so captured popular imagination as the ‘Sabbath of the Witches’.

The image of Capricorn represents the primordial Polar North, and the Gate of the Gods, as opposed to the Gate of Man symbolised by the summer solstice.

Capricorn and the Flaming Sword

The 26th path of A’ain connects Tiphereth, the sphere of the Sun, with Hod, the sphere of Mercury, and is imaged forth by the 15th Tarot key. The Renewing Intelligence refers to the renewal and perpetuity of all created forms. On the human level, the renewal refers to the adaptation that is required so the intellect does not atrophy—for the identification of the personal ego with the forms or constructs that appear in Hod increases the limiting or restricting power of Saturn, ruler of Capricorn. According to the (Egyptian) Book of the Law, I: 41,

The word of Sin is Restriction.

It is the desire to become free of material limitations that drives man to seek freedom. It is necessary, though, to understand the principles of nature and their operation in the world before any limits can be transcended. The primary limitation is man himself, and his ignorance of natural laws. The magical powers of the 26th path are the Witches Sabbath (so-called) and the Evil Eye.

The Dweller on the Threshold

Saturn or Set has many forms. His nature is something of a paradox. The 14th Tarot Atu for the month of Sagittarius traditionally depicts an Angel, while the Atu for Capricorn and the solstice depicts a Devil. This Angel and Devil are two sides of one coin, a dual expression of the soul. The trickster, the shapeshifter, the adversary, the opposer, the shadow, the stranger, the ‘other’ are all names for Set, Saturn or the Devil, whose role in initiation is so central that sometimes he is termed as simply, the Lord of Initiation. Another epithet is the Dweller on the Threshold.

While it is true that aspirants are tested by what is poetically termed the Lord of Initiation, Probationers do not swear any oath or obligation that would incur a trial by fire. Nonetheless, as soon as a foot is placed on the path, the Dweller on the Threshold will appear. The shape or form of this Devil is unique to each individual. While this deters many from continuing the work they began with such enthusiasm, it is the first stirring of the Occult Force.

Whether initiation really takes hold or not is largely determined by the way the person responds to the Dweller on the Threshold. There will be help if that help is recognised for what it is. There will most certainly be hindrance, obstruction and even seduction—the powerfully compelling voices that urge us to give this up as it will do us no good, that we have made the wrong choice or there is a better, more authentic discipline further down the road. The Dweller on the Threshold may take the form of some perceived or genuine misfortune, or a general sense of unease or misgiving. Money can be a considerable ‘Dweller’—whether there is too little, or too much of it. An outbreak of supernatural phenomena quite often occurs with those that have awakening psychic sensitivity—the ‘things that go bump in the night’. The Initiates are those who persist, that possess the will and resolve to keep on. Perhaps there is something else too, the “factor infinite and unknown” referred to in the (Egyptian) Book of the Law, II: 32. It is also written that “many are called but few are chosen”.[2] It is not enough merely to be enthusiastic at the outset; there must be inner conviction, which arises from innate knowledge.

1. The Egyptian Tarot of Thelema trump for Capricorn Solstice is Set XV. The card and its description may be viewed here at Ordo Astri.