Ludwig van Beethoven was born at 03:40 am on December 16th, 1770 in Bonn. His horoscope has the Sun, Moon and Mercury in Sagittarius. Jupiter, ruler of Sagittarius, is accentuated by conjunction with the Sun. This is apt considering that Beethoven developed the music of the Classical era so far beyond its existing parameters that many persons at the time could not comprehend what he was doing.

Born at the dark of the Moon, Beethoven was strongly influenced by the revolutionary movement in Europe. The position of Uranus in Taurus directly opposite his Scorpio Ascendant is descriptive of his love for ancient traditions combined with magnetic compulsion towards individual freedom and liberty. Beethoven openly despised the rigid class system of the time. Friends and patrons alike found him unconventional, uncompromising and ‘difficult’. 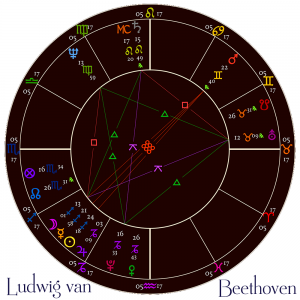 e placement of Uranus in the 7th house indicates misfortune in matters of love. The field of the 7th house embraces ‘all others’, including any marriage partners. Beethoven never married but fell passionately in love with a succession of unattainable women. That is to say, the women were unattainable by virtue of their higher social class or ‘position’.[1] In the case of his love for Antonie Brentano, the problem was that she was already married. In July 1812, the composer spent two days writing a now famous love letter that he never sent, and possibly never intended to send. It was addressed to “you, my Immortal Beloved”, and went on to include,

“My heart is full of so many things to say to you—ah—there are moments when I feel that speech amounts to nothing at all. Cheer up—remain my true, my only love, my all as I am yours.”

The unaspected Venus in Capricorn in the 3rd house of the chart indicates that Beethoven had an inclination towards falling in love with women that he taught the piano to. Women of ‘noble breeding’ were expected to play a little music as an ‘accomplishment’, so their husbands would not be bored by their company. While exalting the women to the heights (Saturn at Midheaven), Beethoven would remain isolated in the relationship for one reason or another, and so unable to form what was in those days called ‘an attachment’ with the object of his desire. 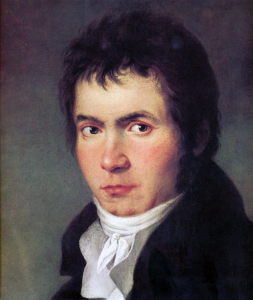 Anecdotes and letters show the Uranian element to be very powerful with Beethoven. He supported the French Revolution until Napoleon declared himself Emperor. On hearing the news, Beethoven took the front page of the score for his 3rd Symphony, upon which he had written a dedication to Bonaparte, and tore it in half, separating his name from that of the self-proclaimed Emperor. When his brother once acquired some land and signed himself as “van Beethoven, land proprietor”, Beethoven replied, “van Beethoven, brain proprietor”. Beethoven famously said to the noble Prince Lichnowsky (a patron and admirer),

“What you are, you are by accident of birth; what I am, I am by myself. There are and will be a thousand princes; there is only one Beethoven.”

Mars is the Lord of the Horoscope, as ruler of the Scorpio Ascendant. Mars, from his location in the 8th house, sends three formidable opposing rays against the Sun, Moon and Mercury in the 2nd house. As the 2nd house generally governs the physical body, it is impossible not to think of the crippling deafness that brought the maestro to the brink of suicide. Survival of that period was accomplished by a heroic effort of will. Only love of God, and the gift of music—that there was so much more music he had yet to give to the world—saved Beethoven from self-annihilation.

A further notable configuration in the natal horoscope is the Grand Trine formed between Neptune, Uranus and Pluto in the earth triplicity. The slow-moving outer planets are traditionally regarded as ‘impersonal’ factors in a horoscope, marking the character and experience of an entire generation. There are various placements, however, that can indicate the potentially subversive intrusion of supersensory phenomena.[2] Scientific orthodoxy will not accept the ‘supersensible’. Nonetheless thousands, perhaps millions of persons have experienced something that is only expressed in terms of spiritual philosophy, for example, ‘transfiguration’, when listening to the music of Ludwig van Beethoven.

Alexander Wheelock Thayer (1817–1897) was the author of the first biography of Ludwig van Beethoven. The work is still regarded as a standard reference on the composer’s life. Ludwig was well versed in classical Greek literature as well as that of the German philosophers of his time. Of the German writers, the composer particularly revered Schiller and Goethe. At around the middle of his career, Beethoven wrote to a friend, 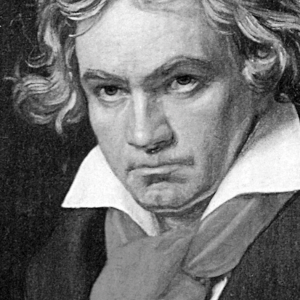 “Since that summer in Karlsbad I read Goethe every day, that is, when I read at all. He has killed Klopstock for me. You are surprised? And now you laugh? Ah ha! It is because I have read Klopstock. I carried him about with me for years while walking and also at other times. Well, I did not always understand him, of course. He leaps about so much and he begins at too lofty an elevation. Always Maestoso, D-flat major! Isn’t it so? But he is great and uplifts the soul nevertheless. When I could not understand him I could sort of guess. If only he did not always want to die! That will come quickly enough. Well, at any rate, what he writes always sounds well. But Goethe—he is alive, and he wants us all to live with him. That is why he can be set to music. There is no one who lends himself to musical setting as well as he.”[3]

‘Maestoso’ is a musical term, meaning, ‘majestic, dignified’, usually quite slow in tempo. To Beethoven, the key of D-flat major, with many black notes if played on the piano, would have epitomised a mood of depression or despair.

Thayer reports that in 1823, the Englishman Edward Schulz wrote of his visit to Beethoven. He had found in him a friend of ancient Greek literature such as the works of Homer, particularly his Odyssey. Beethoven preferred Plutarch above all classical writers; from there he developed an admiration for ancient Egypt. In Isis and Osiris, which was written as a letter to Clea, a priestess of Isis, Plutarch writes,

“All good things, my dear Clea, a sensible men must ask from the gods; and especially do we pray that from those mighty gods we may, in our quest, gain a knowledge of themselves, so far as such a thing is attainable by men. For we believe that there is nothing more important for man to receive, or more ennobling for God of His grace to grant, than the truth. … Therefore the effort to arrive at the Truth, and especially the truth about the gods, is a longing for the divine. For the search for truth requires for its study and investigation the consideration of sacred subjects, and it is a work more hallowed than any form of holy living or temple service; and, not least of all, it is well-pleasing to that goddess whom you worship, a goddess exceptionally wise and a lover of wisdom, to whom, as her name at least seems to indicate, knowledge and understanding are in the highest degree appropriate.”

1. A musician, even a composer and performer of exceptional ability, was no different from a merchant in the social order. A woman of the nobility, or otherwise of high standing, could not enter into a liaison with a person of inferior rank without risking her reputation and inheritance. Indeed, she could risk more than that. If unsupported she could not gain employment even as a menial servant. The embankment of London, for example, was densely populated in those days with completely destitute women from all social classes.

2. The book Hermetic Astrology has a chapter devoted to ‘Outer Gateways’  formed when outer planets make a personal impact on the native. These are sometimes associated with supersensory phenomena. Some dictionaries do not include the word, ‘supersensory’, as it is not acceptable to conventional science. The Oxford dictionary gives, ‘transcending the senses; that is above or beyond what is perceptible by the senses’. It would be more accurately described, ‘beyond what is perceptible to the ordinary human senses’. Some persons, and many species of animal and bird, have extraordinary senses. The word was coined by the 19th century psychical researcher, Edmund Gurney.