Babylon the Great and the Sphinx of Egypt

In the region of Old Cairo, or Keraha-Babylon, there are remains of a colossus that once stood in the vicinity of the ancient Egyptian temple of Babylon. The mighty image was of Hathoor, as can be determined by the intact base of her ruined crown. By historical accounts, there is a meaningful association between Hathoor (or Isis) and the sphinx that guards the nearby pyramids. The association will become self evident as we proceed with our investigation.

The ancient Egyptian city of Keraha-Babylon is east of the Giza plateau, north of the modern city of Cairo. It is of great historical significance, for its situation on the Nile meant it was both port and fortified gateway to the old sacred road to On, or Heliopolis (Egyptian Aunnu). The pyramids and sphinx of the Giza plateau are in full view of the gateway to On. Additionally, the temple of Per-Hapi on the Nile port, south of Keraha, at one time contained a line of sphinxes, among other extraordinary relics found scattered throughout the region.

This article is abridged from the book, Babalon Unveiled! Thelemic Monographs. The book is a collection of 36 monographs, of which ‘Babalon Unveiled!’ forms the centrepiece. The description and cover art can be viewed here at Ordo Astri.

The name of the Sphinx of Egypt is Harmachis, as borne forth on its own stele, called the Dream Stela. The vastly antique statue depicting the woman and lion in one image is otherwise known as Hrumachis or Hormaku. The great statue of Hathoor, crowned with the sun, gazes eternally at the Sphinx of Egypt, her child-star, consort and divine image. While this may be construed metaphorically, it was a literal fact while the colossus, Babylon the Great, stood at the gates of On.

Babylon was the pre-historical name of the great centre even before it was called Keraha. The name of Babylon owes to a corruption, or linguistic simplification, of the ancient Egyptian name: pr-hpi-n-iunu, ‘Nile temple of the nome Aunnu’. A nome is an ancient Egyptian earth location regarded as sacred centre. According to the Pyramid Texts the name Keraha refers to the field of the battle between Horus and Set.

The battle becomes self-explanatory when it is considered that Keraha marks the exact division or boundary between the two lands of Khem, Upper and Lower Egypt. It is the geographic meeting or union of the red and white crowns of the North and South. Over long ages of time the symbolism of the union of the red and white has become embedded in magical and alchemical literature as the mystic marriage or royal wedding of Sol and Luna. The Persian temple of Babylon was known to the Arabs as Qubbat Babylon, ‘cupola of Babylon’, a fire temple. The cupola, a square tower with a rounded dome, is frequently used in alchemical literature to signify the furnace or athanor.

In modern times, the alchemical texts have been misconstrued. A rudimentary and false explanation of the secrets of alchemy as either pertaining to occult mysteries of physical sex or to psychological process has resulted in ludicrous attributions. For example, the athanor has been associated by Aleister Crowley and others with the male sexual organ whereas it is in fact a feminine symbol. The cucurbit, while seemingly an emblem of the female, is better understood as the containing principle of the entire occult anatomy.

Babylon: Lost Word of the Aeons

The rationalisation of the fragmentary knowledge that survived the fall of Egypt to be filtered through the distorting mirror of uninitiated scholarship has continued to the present day. The ‘lost word’, far from being recovered, is buried more deeply than ever in the substratum of human consciousness. Nonetheless, through the dark ages of man’s reign on earth, the living voice of Babylon the Great, whom we know as BABALON, emerges from the depths, calling us to truth and justice.

I was sent forth from Mystery,
And I will come to them that reflect upon me,
For those that seek me, shall find me.
Behold me, ye who reflect upon me,
And listen to me, ye that have ears to hear!
Ye who have waited for me, take me to yourselves,
And do not banish me from your sight.
Do not say hateful things of me, do not hear them spoken.
Do not be ignorant of me anywhere or at any time.
Be vigilant! Do not forget me.

The Gnostic scripture, Thunder Perfect Mind, was undoubtedly received in oracular fashion. By the time the biblical New Testament gospels were composed, the ancient Egyptian language was forgotten along with the secrets veiled by its hieroglyphs. Scriptural editors were influenced by military asceticism.

Mighty Babylon, gigantic symbol of the spiritual authority of the ancient Egyptian priesthood, was long ago desecrated by a Persian king who thought that treasure might be buried underneath! According to the book of Revelation, 14: 8:

And there followed another angel, saying, Babylon is fallen, is fallen, that great city, because she made all nations drink of the wine of the wrath of her fornication.

Thus the irony deepens, for to religious zealots down the ages it is Babylon that symbolises the pride and arrogance of materialism. Perhaps the adultery, confusion or mixing up of things, was after all on the side of scriptural scribes. The mythical ‘fall’ of Babylon the Great may now be seen as having its origin in literal fact.

Babalon and Ouarda the Seer

Liber AL vel Legis is a contentious oracle since a religion has been formed around it, and its so-called prophet, Aleister Crowley. However, there most certainly was a pythoness that brought forth luminous shards of the ancient Egyptian wisdom, albeit heavily cloaked in Crowley’s conceit once he had determined that it might place power in his hands. It is likely that Rose Edith Kelly (Rose Crowley) had far more to do with the transmission and writing of Liber AL than is evident from the account given by Aleister Crowley. It has been suggested we might rename the oracular book in question as the Book of Ouarda the Seer, or of Soror Ouarda, 576, for that was Rose’s magical name. 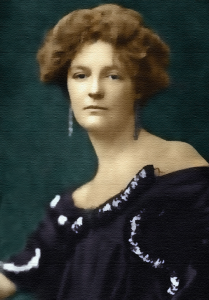 Rose was by all accounts the medium and intelligence for the transmission activated through the Stele of Revealing in the Cairo museum in 1904. We know that Aleister Crowley needed her help when he wished to change some of the wording after the transmission, even though he later claimed she had not even been present in the room when the book was received! Babalon appears in two aspects in the Book of the Law. Firstly, in cosmic form as Nuit, and secondly as the Scarlet Woman or soul, who may ‘fall’ or undergo resurrection. The words that Crowley wanted to change were from Nuit, Liber AL, I: 26:

And the sign shall be my ecstasy, the consciousness of the continuity of existence, the unfragmentary non-atomic fact of my universality.

Crowley received permission (presumably) to change the last five words to, “the omnipresence of my body”, a rather trite theological intervention compared to the vitality of the original phrase. Although superficially the meaning is the same, the neologism ‘unfragmentary’, used in conjunction with ‘non-atomic’, specifically declares the geometry of space-time as non-Euclidian and the atomic world as a mere conventional illusion. Since Einstein produced his theory of relativity the instruments of material science have proved, for example, that starlight bends around the gravitational field of the sun. The curvature of the sun’s rays forms a timeless, dimensionless sphere of sensation around the star. This is comparable to the naked splendour of the body of Nuit, which is the ancient Egyptian principle of universal containment.

Moving forward to the present time, Babalon figures prominently in certain theurgical rites. For example, in the reformed Ritual of the Pentagram, Nuit assumes four faces about the circle of the place. In the South, attributed to elemental fire and the zodiacal sign of Leo, Babalon stands guard. She is also regarded as Mistress of Magick. It is in her name that the temple is opened and closed. The Communion Mass, which involves three primary symbols of Incense, Light and Wine, is dedicated to Hormaku, the Sphinx of Egypt and the image of the Hermetic Light as magical child.

Babylon the Great of Egypt, our Lady BABALON, as we know her through our rites and ceremonies, oracles, dreams and aspirations, is the heart and soul of the ancient Egyptian civilisation. She stands forever upon the threshold between the two lands, union of the red lion and white eagle, the kingdom of earth and that of heaven, body and soul, mind and heart. Empirical evidence supports the ideal, echoed down the ages through countless instances of inspired writing and thought, that those who put in place the magical science and art of Khem were not human, but an elder race of which very few on earth may now bear the image. The continuity of existence was therefore known aeons before Einstein produced his theories for the assistance of man’s self-destruction. The surviving remnants of the Egyptian arts declare a doctrine that is both rational and non-rational. Long ages before the general law of relativity was known by science, the priesthood of Set understood that the geometry of space-time is non-Euclidian. It is not the phallus of Osiris that is the ‘lost word’, but the soul of Nature that is as yet unknown to those who dwell in darkness and ignorance. We call this Thelema, which is the living seed of creative power latent within the dwarf-soul or star of man.

While man sleeps, a myriad of forms arise to bewilder and enchant him. Yet these forms, each masking the formless reality of bornless space, may equally enslave man or illumine the path to enlightenment and ultimate liberation. We may suppose the motive for founding upon the earth an exact mirroring of the complexities of nature was inspired through love. The mirror of the black land of Egypt expresses truth through mathematics, astronomy, hieroglyphics, art, gods, magical rites and ceremonies. Those preeval seers, skrying across aeons of time, could doubtless foresee that the race of humans is predoomed to spread violence, warfare, contagion and disease across the entire planet. Out of love, they planted the seeds of the soul’s salvation deep within the hidden matrix of our existence. The Gnosis is in itself indestructible. While the colossus of Babylon-Hathoor was pulled down and broken into fragments by slaves of a mad king, her temple yet stands, inviolate until the end of time. And, as according to all ancient wisdom sources, the end is with the beginning.

© Oliver St. John 2018, 2020
This article is an abridgement. The fulll length essay, with annotations and citations, appears in the book, Babalon Unveiled! Thelemic Monographs.