The Egyptian Tarot of Thelema trump for the Aries Equinox is Hrumachis IV.[1] 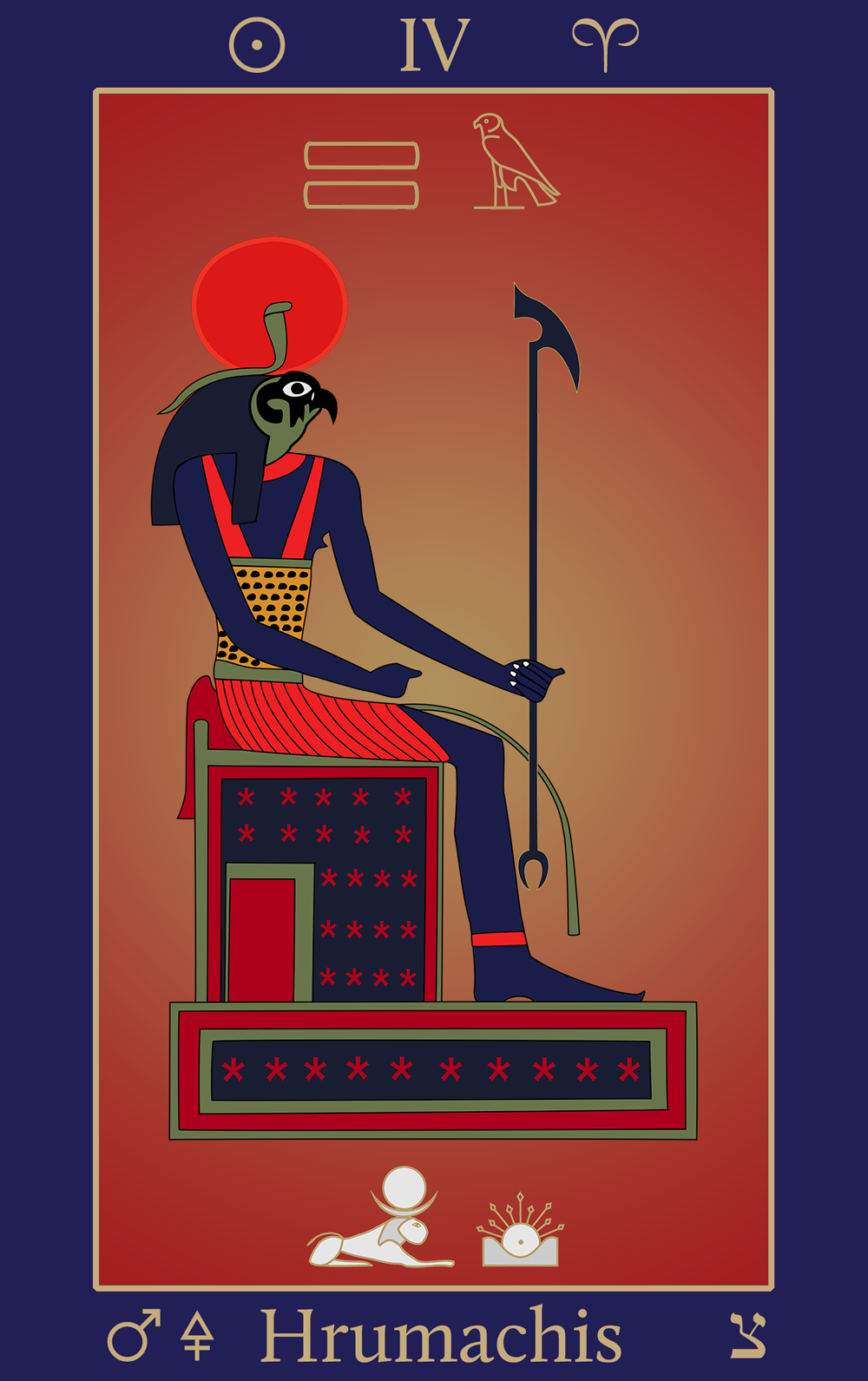 The king portrayed in traditional versions of the trump is the fisher-king found in the myths and legends of many cultures. The king is an image of meditation where key symbols are held and fixed by concentration of will. Meditation requires sustained and persistent effort over a lengthy period of time—years, not days or weeks—before it ceases to be regarded as a personal exercise.

The powerful astral glamour that pervades this path gives rise to the delusion of instant enlightenment, the notion that much can be gained spiritually in return for very little effort. The desire for acquisition of spiritual or magical powers, or the belief that one can be made ‘healthy, wealthy and wise’ through magical manipulation, psychological improvement or hypnotism is no more than the restless urge of the human ego to maintain its tyranny over the soul. The beginner at meditation discovers that instead of making things more comfortable, the practice irritates the body and is annoying to the ego. Most therefore terminate the discipline within a few days or weeks, deciding that it is not their ‘path’, after all—they soon return to the market place where vendors are eager to trade in miracles. The magical power of the 28th path is the Power of Consecrating Things.

The Aries Equinox and 28th path thus embody the principle of governance. The King and the land are one. The ego and body are one. There is a need to seek out a holy graal, lest the body of the king becomes a wasteland, and the soul is dragged down with it.

The 28th path of Tzaddi connects Netzach, the sphere of Venus, with Yesod, the sphere of the Moon. The title of the 28th path is the Natural Intelligence, for it is the perfection of the nature of all things under the orb of the Sun. The desire of Venus reflected into the mirror of the Moon makes impressions upon the Astral Light. Much of the work of occultism is to create new forms as suitable vehicles for the incarnation of the will to transcendence. On the other side of the coin, forms are created to hook or enslave the soul, as revealed by the ‘fishhook’ of the letter tzaddi.[2]

Esoteric Title of the Tarot Key

The esoteric title of the Tarot trump is Son of the Morning, Chief among the Mighty. Lucifer or Satan, in Christian terms, is generally thought to be the ‘son of the morning’ referred to in the book of Isaiah, 14: 12, which is a title of Venus as the Morning Star. The title of the 4th Tarot Atu is incorrectly given in Crowley’s ‘acquired’ work, Liber 777, as Sun of the Morning. It is incorrect because the title refers to Venus, not the Sun. Chief Among the Mighty refers to the original Golden Dawn placement of the trump on the 15th path from Chokmah to Tiphereth. Curiously, Son of the Morning adumbrates the change of placement to the 28th path of Tzaddi recommended by Aiwass in the (Egyptian) Book of the Law, I: 57.

1. The Egyptian Tarot of Thelema trump for the Aries Equinox is Hrumachis IV. The card and its full description can be viewed here at Ordo Astri.
2. The description of the 28th path is from The Flaming Sword Sepher Sephiroth.

Related articles: Equinox of the Gods