The Egyptian Tarot of Thelema trump for the 15th path of Aquarius is Nuit XVII. The esoteric title of the path is Daughter of the Firmament: Dweller between the Waters. 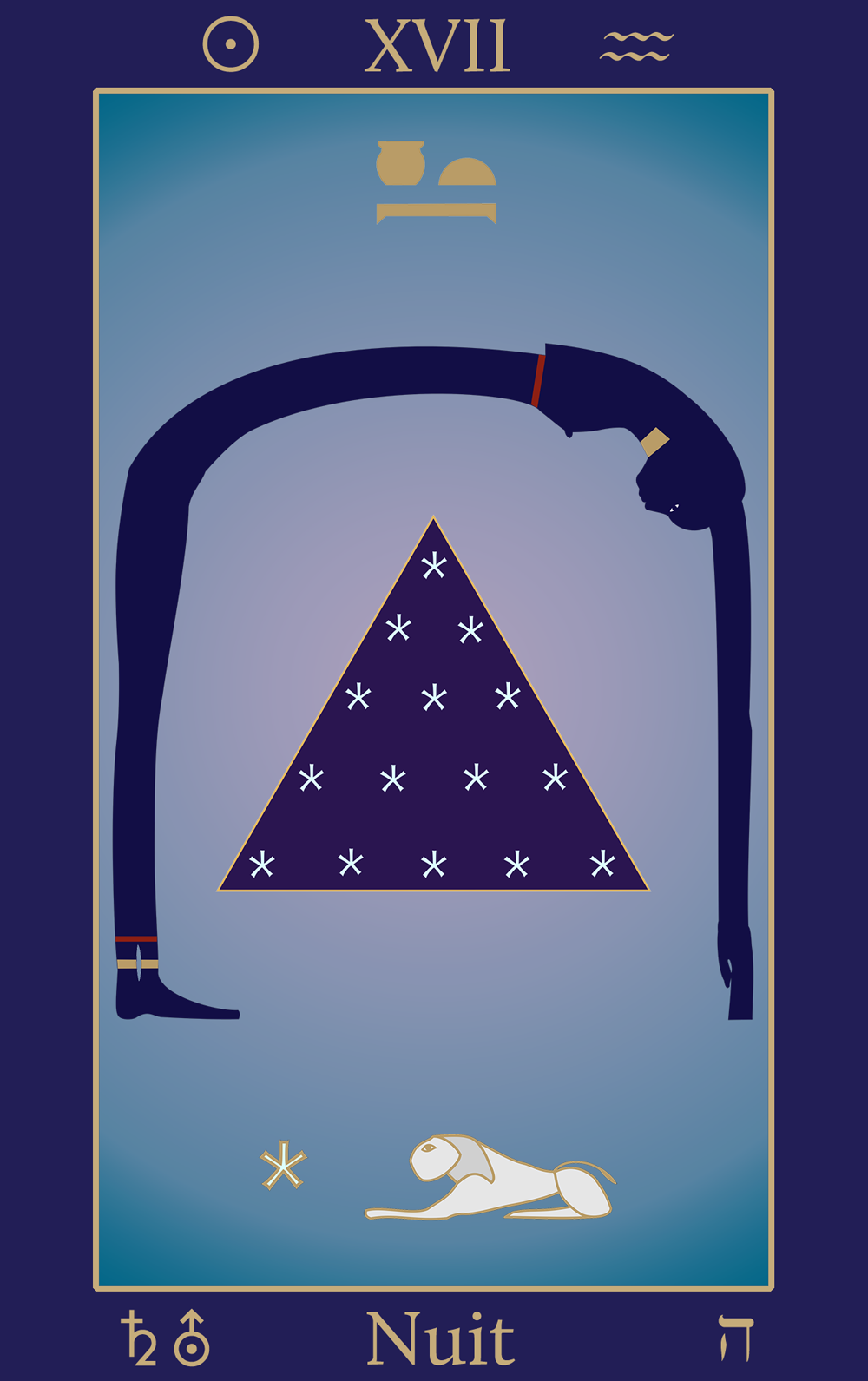 The placing of The Star XVII on the 15th path is to end the ages old confusion between the blood of material generation and the pure essence that is the substance of spiritual regeneration. The 15th path of Hé connects Chokmah, the sphere of the Zodiac, with Tiphereth, the sphere of the Sun. The 15th path is called the Constituting Intelligence because it is the essence of creative force that arises in pure darkness; the word used for ‘essence’ is etzem, which has the same root as OTz, ‘tree’, from whence the Tree of Life. The same word etzem can mean ‘bone’, ‘body’, ‘life’, and ‘substance’. The power of manifesting or begetting is the primal power of the Goddess, which is that of division into two; the path therefore corresponds to the Goddess of the Stars. As declared by Nuit in the (Egyptian) Book of the Law, I: 59,

My incense is of resinous woods and gums; and there is no blood therein: because of my hair the trees of Eternity.

Chokmah is the chakra of the Zodiac, as separate and distinct from the fixed stars, which are the domain of Kether and the North Pole of the universe. The Zodiac is the belt or girdle of Venus, which is the planetary symbol of Nuit in her manifestation as visible nature. Incense and fragrance are ancient metaphors for pure spirit or essence—“that essence of creative force that arises in pure darkness”. The darkness itself is a metaphor, since it is more than merely an absence of light. Visible light is a veil, an appearance that clothes the nakedness of Nuit, whose essence is interior radiance. According to the book of Genesis, there were two trees in the Garden of Eden, the Tree of Life and the inverse Tree of Knowledge. Originally, there was one eternal Tree of Life embracing heaven, earth and the underworld.

‘Blood’ is the self-replicating power or energy that moves through all incarnated creatures, yet the oracle of Nuit in the Book of the Law, I: 59 asserts that her creative essence has “no blood therein”. It is therefore necessary to counterchange the Tarot trumps on the 15th and 28th paths. Aries, previously assigned to the 15th path, is the sign of the fire of blood, which is the blood of the Lamb as depicted in Christian esotericism. Aquarius, on the other hand, is the sign of the Waters of Space, typified by the Egyptian hieroglyph of two streams of water or radiation.

Nuit is the Star Goddess particularly concerned with the occult or hidden side of nature; her mysteries are those of the Occult Force and of regeneration through the elemental ‘child’ that reflects the true son or sun-star of Nuit.

The magical weapons are the Aspigillum for the sprinkling of the lustral water, and the Censor for the perfumes. The magical power of the 15th path is that of Astrology; the starry wisdom of the 15th path should not be confused with popular notions of astrology.

Aquarius and the Essence of Night

Nuit is depicted in the Tarot trump numbered 17 as cosmic space, which is an analogy for her subtle (i.e. formless) manifestation. The esoteric title of the trump is Daughter of the Firmament: Dweller between the Waters. The Sri Yantra of the Eastern Tantras is a geometric symbol of the matrix or cosmological foundation formed by the essence or emanations of Nuit and her sun-star. The same matrix was displayed in ancient Egyptian depictions of the Goddess, especially the polymorphic variations of Nuit and Hathoor, by networks of five-pointed or five-fingered stars. The Egyptian hieroglyph for the radiation of light or transmission of energy is identical to the astrological wave-glyph for the zodiacal sign of Aquarius.

The Egyptian Tarot of Thelema trump for Aquarius is Nuit XVII. The card and its description may be viewed here at Ordo Astri.